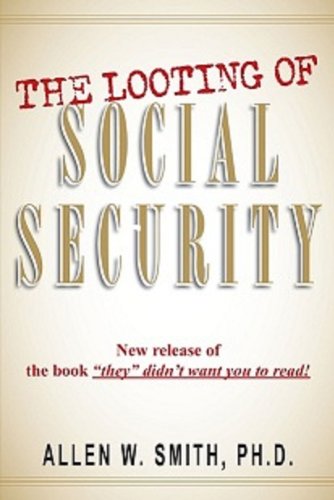 Book: THE LOOTING OF SOCIAL SECURITY - New release of the book by Allen Smith, Ph.D.

about this book: The Book that America Was Not Supposed to Read

I don't know how common book censorship is in the United States today, but I am one author who has experienced it first hand, and I suspect that it is much more widespread than most people realize. Shortly before President George W. Bush launched his Social Security privatization campaign in March 2005, my book, The Looting of Social Security :How the Government is Draining America's Retirement Account, was pulled from bookstores across the country, and listed as "unavailable" by Amazon.com. Some individual, some organization, or some agency of government decided that the American people should not be allowed to read my book, because it exposed the great Social Security theft and the government's efforts to keep the American public from finding out about it.

The book was the product of four years of research, following my accidental discovery, while doing research, in early 2000, that the government was channeling the surplus Social Security revenue into the general fund and using it as general revenue, just like income tax revenue. The money was used to finance tax cuts for the rich, wars, and other programs. None of the money was saved or invested in anything.

Prepublication reviews were strong. The Boston Globe reported…With dismal clarity, Smith lays out the step-by-step history of how a national pension plan was transformed into an outright shakedown of working people.. ALA Booklist wrote, Smith has written a scathing account of massive fraud on the part of our nation's leaders, who have plundered every cent of the Social Security Trust Fund surplus that was specifically earmarked for the retirement of baby boomers.

The book started out selling well, but suddenly it became unavailable in bookstores or on Amazon.com. I don't know exactly what happened, or specifically who was responsible. But ,when I asked the publisher to revert the publishing rights back to me so I could publish the book elsewhere, they refused to let go of the rights. Without owning the rights, I couldn't even self publish it. It took three years to regain the rights. In 2010, I published this new release of the book, which includes all of the original material plus a substantial amount of new and updated material.

Not much has changed since 2010. As I released my latest book, Ronald Reagan and the Great Social Security Heist, in late 2013, the public had not yet learned the government's big dirty secret about the looting of Social Security. Today, the trust fund is totally empty. It holds no liquid real assets, and the government is having to borrow money each year to cover the Social Security deficit. Everyone who cares about the future of Social Security and the integrity of the government, should read this book. You will find it shocking and depressing, but we must be aware of a problem before we can do anything to solve it.