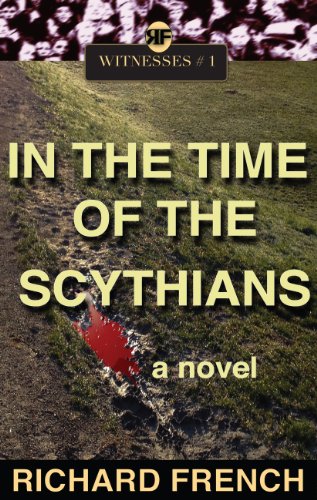 Book: In the Time of the Scythians (Witnesses Book 1) by Richard French

about this book: The revival of an international, antidemocratic, criminal cult called the Scythians touches many people, in particular Paul Kingsley, part-time teacher, journalist, and story-writer. The cult leaders have a special interest in him because he is the illegitimate son of the man who began the Scythian renewal.

Kingsley, however, much prefers the ways of the American family that adopted him. In order to make a statement about his preferences, Kingsley enlists in the American army -- a thing no Scythian would do. He marries an Asian woman and also writes stories based on America's past and his experiences in the military. Some of his writings are included in this novel, which also relates the beginning of his campaign against the Scythians.

Others battle the cult at the same time, including the editor Stephanie Markham and her associate, a theater man named Michael Rainwater. Stephanie brings the various strands of the story together.

This novel is the first in a series called "Witnesses", which examines, criticizes, and celebrates the democratic way of life.