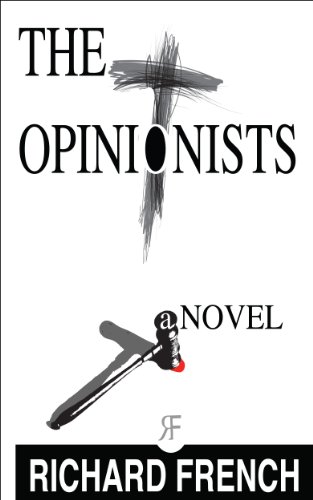 Book: The Opinionists by Richard French

about this book: This novel has two main strands in alternating chapters.

1. It is the mid-1950's. A group of movie-makers, led by the almost-legendary director Vincent Adair, gather in a town called Stilton Fields to make a film about a 17th century theological controversy in which a woman named Lydia Bowstreet played a leading role. Each odd-numbered chapter focuses on one or two members of the film-making team or residents of the town. We learn about their stories, a scandal in Stilton Fields, and the creation of the film from original idea to final version.

2. The even numbered chapters take place almost 300 years before. They tell the story of Lydia Bowstreet and the theological debate in which she was the central figure. This part of the story highlights the stress that can arise when orthodoxy and a longing to think independently collide. There are plenty of errors and misdeeds on both sides.

"The Opinionists" is based on the controversy that surrounded Anne Hutchinson in the early days of colonial Massachusetts. The underlying theme of all parts is the quest for freedom in North America.