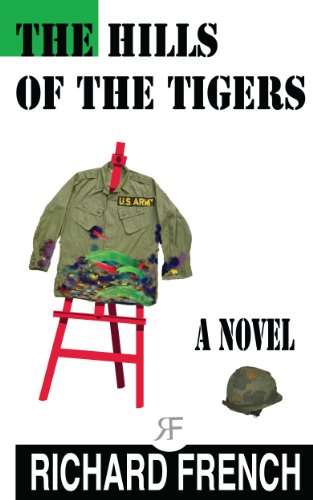 Book: Hills of the Tigers by Richard French

about this book: "The Hills of the Tigers" tells the story of an artist, Carl Norberg, and two communities he belongs to -- an American military unit in Asia at the start of a war and a large city where he settles after he leaves the army and the war has failed.

Many stories about enlisted men tell about their troubles and miseries in later life. I wanted to write about a soldier and veteran who faces several challenges fairly well. More than that, I wanted to write about not one central character only but also the people he comes in contact with, particularly in civilian life. How do art and a failed war touch their lives?

I developed my working method partly in response to a comment I received from an editor to whom I sent what was then a novella about Norberg's time in the military. She said that the story was good as it was but incomplete.

I thought about her criticism, and when I took up my story again, I found a way of finishing the story that seemed original and was pleasing to me.

A woman with experience of the hardships of war who read my work said that it had inspired her to go on with her own work. I hope "The Hills of the Tigers" will have a similar effect on other readers, that it will be a source of inspiration.