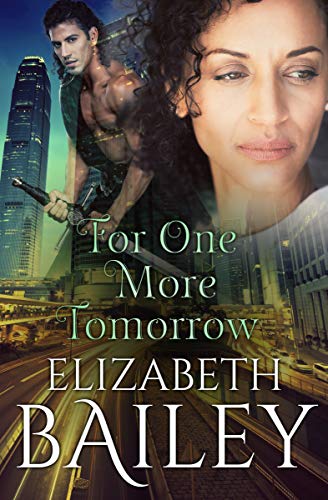 Book Review: For One More Tomorrow by Elizabeth Bailey

about this book: I have a fascination with Macbeth, having written a school play adapted from Shakespeare which I then directed. The students had studied the original in English, and their understanding of the text informed the play. When I came to write Sadie's story, who is also directing the play, it somehow evolved and intertwined with the story of the real Macbeth.

Sadie has been a long time coming. The pivotal event in the book was written as a short story originally. Later I developed this into a potential novel, which never made it in the form I intended. Finally, the real Sadie caught up with me, demanding to be written up the way I've done it.

Sadie's character grew over the evolution, until I understood her as well as I understood the Shakespeare Macbeth. And then I had to explore the man behind the myth, and the differences were fascinating.

But For One More Tomorrow has a deeper layer for me. The story is really about the soul of a man and how being in a body changes the way we think and operate. But I hasten to say that this dichotomy is explored within a fully rounded emotional tale, which has something of an edge in the tradition of Daphne du Maurier perhaps. I think of it as a romantic ghost story with a shocking twist.

a new view of Macbeth

What a good story. This book deals with subject matter that makes people think one is going mad! Talking to spirits, seeing ghosts, living the past. The heroine struggles with all of this in a most personal way. Beautifully written from different viewpoints, this lively book questions some very basic ideas about life and death.