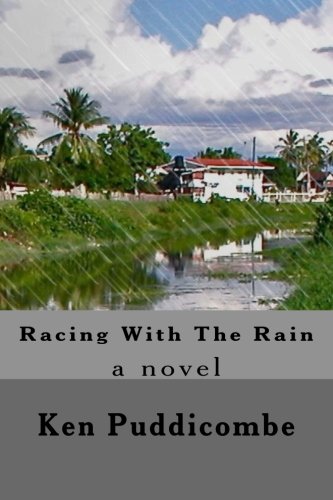 Book: Racing With The Rain by Ken Puddicombe

about this book: It is 1980. Carl Dias, born in British Guiana, a naturalized Canadian citizen finds that his marriage is unraveling and his life is on a downward spiral. And now, he receives word that his father has died in Guyana.

Carl's early life has been noted for conflict. Back in British Guiana he was a card carrying member of the left-wing ruling Reform Party. This inevitably led to a clash with his father Augusto, a prominent businessman connected with the Conservative Party that is fiercely anti-socialist. Added to the conflict between father and son, Carl had taken a scholarship to Cuba in his later teens.

Racing With The Rain follows Carl Dias' return, after sixteen years, for his father's funeral. He will find a country that's radically different from the one where he grew up; a country in the hold of a dictatorship that manipulates elections to keep the Republican Party in power; an economy that is shattered; a paranoid bureaucracy that is on the lookout for members of a group that is plotting to overthrow the government. And Carl does not reveal that he was once a member of this group.

Carl's return will reignite memories of a period in which the political and social fabric of the colony almost collapsed into conflict and instability. This happened as the two main political parties vied for power, polarizing their supporters into racial factions. In the background was the Kennedy administration pressuring the British Government to engineer the Reform Party out of power, and the CIA infiltrating the country's labour movement.

Will Carl's past catch up with him? Will the Special Branch arm of the government discover that he was a member of the revolutionary group? Will he be detained by the government? These and other issues will determine whether Carl is allowed to leave the country and be reconciled with his family...

This book was written over a period of four years but had been fomenting much longer that that, the writer seeing the need to use the political background of the country to tell a story that would bring out the conflict and show how Western governments played a major role in manipulating the outcome of elections in a British colony.