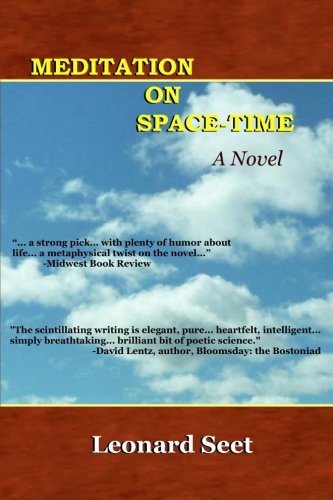 about this book: On an August evening, while Father Lawrence was hearing a stranger's confession, he dreamed of probability waves, black holes and temporal loops. He had gone to Gilead to look for his missing friend Camellia, not to listen to this penitent's vices: seducing women, framing rivals, and laundering church-funds. And the penitent escaped before Lawrence could reveal the other's identity. But soon he would discover the link between this man and Camellia.

When he returned to Boston and found out Camellia was pregnant with Jim's child, he knew the time to play ostrich was over and he must relinquish solitude and prayer. But ever since the girl whom he had counseled, committed suicide, he preferred distancing himself from other lives. And ever since falling out with his best friend, he preferred contemplating the duality of space-time to sorting out his own joy and grief and love and hatred.

Only when he discovered the child's true identity did his tongue tasted evil.

After locking himself in his cabin for days, he decided to renounce his vow and had to learn to equate a dollar with a cheeseburger. He left the monastery ready to battle Jim Whitfield. On the way to Gilead, he bought a gun at a Virginia gun show without knowing how to load the magazine. He would discover the hidden identities behind each face and the secrets inside Camellia's heart, and the liaison between the villain and her. And on a rainy night in Gilead's local park, he held the gun in his pocket and stared into another gun's barrel and he contemplated death rather than space-time. Three shots would thunder through the air and a man would fall into the stream…

Either mercy or justice; either salvation or friendship. Either choice: a flawed solution for a fallen man in a broken world.

Leonard Seet, who wrote The Spiritual Life and understood monasticism and mysticism, portrays Lawrence as a cross between the intellectual and aloft Thomas Merton and the sensitive and reflective Henri Nouwen and detailed the movements of the mind and heart. A monk to rival Brother William in Umberto Eco's The Name of the Rose. If you think monks are dull, think again. The language in Meditation on Space-Time reflects Lawrence's interweaving thoughts and entangling emotions. The novel reads like a mystery as Lawrence sought to outwit his archenemy Jim Whitfield and the Ponzi schemer Donald Larsen and unraveled secrets along the way. Ichiro's obsession with death as the path toward immortality contrasts with Lawrence's sober spirituality. Father Jones the whiskey priest and Edgar Cummingham the salesman-like mortician are memorable characters.

Meditation on Space-Time, a spiritual gem among literary novels, challenges the reader's mind and heart. Thoughtful, touching, haunting, and shocking. For readers who, while sifting through clues to the characters' true identities and hidden agendas, would eat up the hero's every morsel of laughter and tear as if each were bittersweet chocolate.

A Memorable Novel: Beautiful and Provocative

Meditation on Space-Time is a philosophical novel where the quantum mechanical worldview seeps into everyday life. The Uncertainty Principal, and especially the Many-World Interpretation, colors Father Lawrence's perception of reality. A world of possibilities at every moment, where the outcome follows stochastic processes rather than deterministic laws.

But the priest also struggles between the religious life of doctrine and rites and the spiritual life of creativity and mystery, ultimately choosing the latter by renouncing his vow. Like Thomas Merton, he refuses to slaughter his intellect in the name of piety and religiosity.

Father Lawrence must tread through the desert of betrayals and losses to reach the oasis of friendship and enlightenment. And enlightenment is what he seeks rather than perfection—for Ichiro—and happiness—for Camellia. In the end, he must accept the loss of his best friend and carry the pain on his solitary journey toward enlightenment, or just old age.

Meditation on Space-Time is a novel of love and friendship, of good versus evil and of journeys taken. I recommend it for those who reflect such journeys. The lyrical prose that threads through the characters and their secrets is beautiful and provocative. A memorable novel.

A Masterpiece Among Literary Novels

The poetic language in Meditation on Space-Time reflects Lawrence's interweaving thoughts and entangling emotions. "More than once, the broken moon would cast through the window a silver light and remind me of independent events yielding to their own momentum and interacting under natural laws while my mind would impose happiness, grief, beauty, ruin, justice and chaos."

The stream of consciousness of his meditations on space-time leads me into a spiritual journey through the fabrics of reality. But like a mystery, the reader can sort through the clues to find the identities and schemes of the cast of characters. And Lawrence would seek to outwit his archenemy Jim Whitfield and the Ponzi schemer Donald Larsen. Ichiro is a fascinating character, who is obsessed with seeking perfection through death. A very different philosophy of life from that of Lawrence's spirituality.

Meditation on Space-Time is spiritual, philosophical, and intellectual. But also dark and poignant. It leaves you thinking about the nature of good and evil. And you feel yourself among the autumn foliages relishing their last beauty while the sun sets in the horizon. A masterpiece among literary novels.