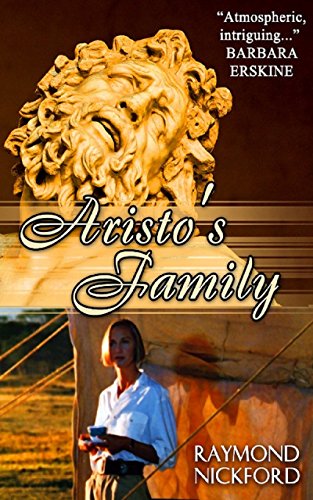 about this book: Based on true life, the setting is a private museum in the ancient city of Paphos on the western Mediterranean coast of the island of Cyprus.

The story begins in 1974 just after the Turkish invasion of northern Cyprus but the realism of 1974 diverges at times in a time warp to the spirits of an ancient Greek family who seem to have been in some way morally outraged, animated and wanting to "make clean" again, Pavlos, the teenage son of Aristo after Pavlos was discovered in bed beneath his father's middle-aged museum colleague, Katerina.

Being half Greek Cypriot myself, though raised and still living in Britain, I have been able to visit Cyprus, enjoy the hospitality of the villagers where my Greek relatives live and drive around much of the island depicted in the scenes throughout the novel so that my research has been first hand. I have enjoyed meeting those from a shepherdess sitting on a wooden stool while lacemaking and watching her flock from there, to the amiable and hospitable monks of the Kykkos monastery high up in the misty climbs of the Troodos mountains.

Both the Anglo-Greek Pavlos and his widowed Greek father, Aristo, a museum curator are refugees from the Turkish invasion, in a sense outsiders, wanting to belong to family after Aristo's family was thought to have all been burnt to death after Turkish shelling. But the deeper rift which 'cries out' to be bridged between Aristo and his son ( thus the agonised expression on the face of Aristo on the book cover) is the need to bridge the cultural differences between the Greek and the English sides of their natures and culture before Aristo and his son can feel father and son love and belonging.

So despite all the jeopardy posed by the morally outraged ancient spirits of Aristo's 'family' and what they might do with an ancient scythe to "make Pavlos clean again" it's really the emotional imperative which moved me to give two years to the writing of Aristo's Family. I'm just thankful that it seems to have appealed to both genders and of all readers in the adult age group.

• "A poignant, literary and psychological suspense. The promise of the early chapters is more than well maintained. This novel is a real page turner, worthy of comparison with the early John Fowles' 'The Magus' - but distinctly Raymond Nickford. An atmospheric, vibrant, spooky page-turner." — Reay Tannahill, historian, novelist and author of The Seventh Son