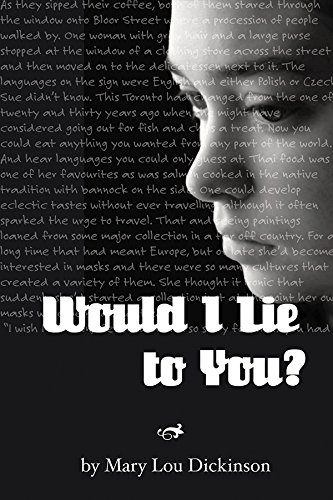 Book: Would I Lie to You? by Mary Lou Dickinson

about this book: A novel that explores the secrets of a marriage that appears to be happy. However, even on his deathbed, Jerry fails to tell his wife a long-held secret. After his death, Sue discovers a psychic's prediction that Jerry had a son he never told her about is true. She then has to deal as well with her own secret that the reader does not know about yet. And thus the reader is faced with the complexities of a marriage of two people in their fifties who loved each other in what seemed a happy marriage that until now concealed so much.

The idea for this novel came when a friend told me after her husband died that he had a son she did not know about until he turned up at his father's funeral. Or at least that was how I remembered what she told me. Turns out she had known about this young man, but had never met him.

Comparison: "Philomena." This is because of Sue's secret that the reader will discover in the course of reading the novel.