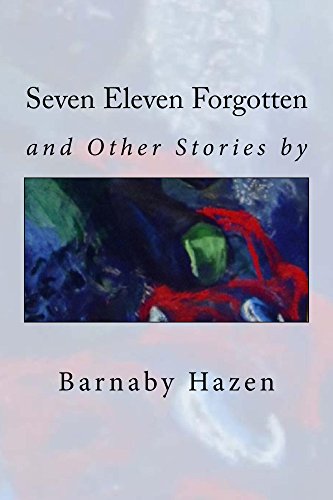 Book: Seven Eleven Forgotten and Other Stories by Barnaby Hazen

This collection also conceived a daughter project open to submissions twice a year. "Seven Eleven Stories" currently offers its Halloween release as the first collection, and is preparing to publish Volume 2. Like the original collection, this twice-annual publication features short fiction and memoir taking place in or around convenience stores such as the periodical's namesake, 7-Eleven (no affiliation).

But Hazen's own full-length book, "Seven Eleven Forgotten and Other Stories", is available in paperback and as an ebook. As one reviewer puts it, the collection is "delightfully eclectic," covering territory from family friendly ("The Sweet Tooth and the Coin Collection") to socially scathing ("The Stoned and Angry Vegan"). The book also follows a recurring character, Alex Aronovich, through his unfortunate knack for dark romantic folly. Besides his terrible luck with women, Alex scrambles to make sense of having dedicated his life to the arts, in an artless, punitive modern world. When alcohol and listless isolation stop working for him, his bout with sobriety proves yet another failure, and he embarks on a trip from his home in Los Angeles to a strange, surrealistic vision of Moscow.