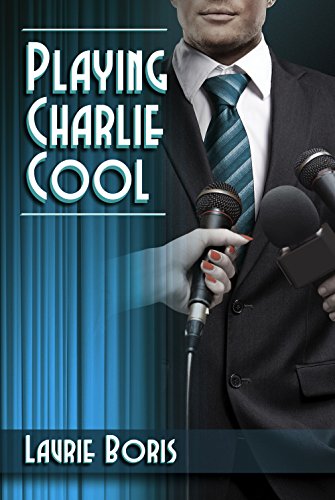 about this book: "Such a great tale with actual conflict and true feelings. I loved this book and couldn't put it down." - Amazon reviewer

"Very sweet story that was smartly written and kept me rooting for Charlie and Josh through the very end. Looking forward to more." - Amazon reviewer

Playing Charlie Cool is a contemporary novel about Charlie Trager, a producer on a top-rated daytime television talk show. He's always been lucky—he has a great job, supportive family and friends, and finally, he's in love. But that's where his good luck might have run out. Falling for Charlie has given Joshua Goldberg, heir to a New York political dynasty, the courage to come out in public—and to his wife. Now Joshua is struggling with an election and a spiteful ex threatening custody of his children if Charlie is in the picture. The ever-resourceful Charlie has a plan to save their relationship, but is he too late?

Although I'm normally comfortable writing from the point of view of a passel of characters who are not me, male and female, I felt a little sensitive when I started writing Playing Charlie Cool. I know what it's like to fall in love with a man, but I don't pretend to know what it's like to be a gay man. Just as I don't pretend to understand the experiences, thoughts, and emotions of, well, anyone who isn't me. But I've always felt that if I approach a character with empathy and sensitivity, getting to know this person, I could create an authentic voice—a human, an individual, and not a stereotype. I'm fortunate to have grown up in an open-minded, liberal family, and the sexual orientation of the people in my life just became another fact about them: blue eyes, hates broccoli, has a closet full of Chuck Taylors, attracted to men. Still, those same liberal roots heightened my sensitivity about approaching this project. Was I being respectful? Did I even have a right to do this?

So I asked Charlie: "Dude. I'm almost old enough to be your mother. And, yeah, there's that other thing. Do you really trust me on this?"

He said, "Hell, yeah." Actually, he used a word you can't say on television. That was enough to get me started.