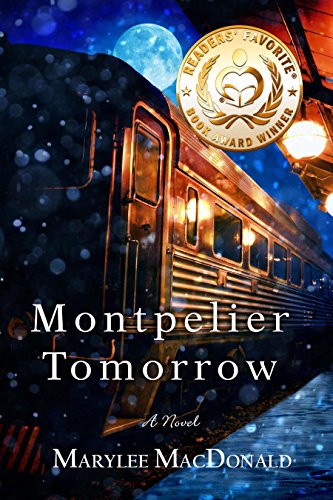 about this book: If I have one message for readers of MONTPELIER TOMORROW it is this: Have as much compassion for yourself as you do for others. Try to let go of the guilt over past mistakes.

In this literary novel, you will meet Colleen Gallagher, a kindergarten teacher who desperately wants a closer relationship with her daughter. Expecting that she can put in a couple weeks of "grandma time" and demonstrate her love, she instead finds herself pulled into the unfolding tragedy of her son-in-law's terminal diagnosis. The young man has ALS and isn't expected to live a year.

Has someone in your family faced a health crisis? Then you know that Colleen must make a tough choice. She needs to earn and living and wants to enjoy her fifties, but instead, she foresees that her daughter, with two kids, won't be able to manage the crisis on her own. Colleen decides to bail out her daughter's family, and since she's super-capable, she does a good job juggling the cooking and care for the dying man. However, as time goes on, her job gets tougher, and she thinks she can't hang in there another day.

MONTPELIER TOMORROW took twelve years to write. It began as a memoir during the years I was my son-in-law's caregiver, but I am a literary writer, and finally, I decided that I had to impose some artistic discipline on the book's structure and characterization. Even when I was going over the final page proofs, I broke down.

I anticipated that readers might not be able to handle the book's intensity, but so far, the book has had a fantastic reception on Amazon and Goodreads--mostly 5 star reviews. Readers have emailed to tell me the book helped them forgive themselves for not being eternally patient with their elderly or ill relatives. Others have said they appreciated the relationship between the grandmother and her grandchildren.

• "An affecting, deeply honest novel; at the same time, a lacerating indictment of our modern health care system." — Kirkus Reviews

Video: Will a dying man's last Christmas in Montpelier, VT be happy or not? Go along on the toboggan ride of ALS.