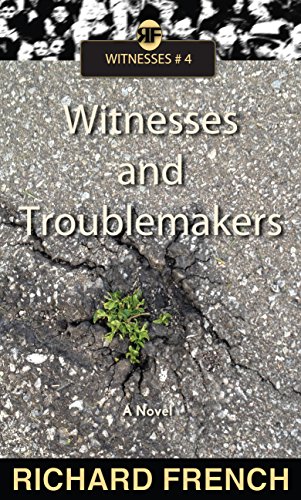 about this book: I've wanted to put fiction writing at the center of my life since my mid-teens. I enlisted in the American army in the 1960's with the idea in the back of my head that I'd turn what I observed into fiction. Although the stories I wrote aren't autobiographical, my dream produced a series I call "Witnesses", of which this is the fourth volume. I'm now working on the fifth and last.

I realized that as I continued thinking and writing that I didn't understand the situation that the U. S. was caught in. I experienced the military firsthand -- as a Lao linguist in Thailand and stateside, not as an infantryman in Vietnam -- and before that I spent four years at a very liberal university where opposition to the war was entrenched.

The only way I could find to think my way through our national dilemma and to go back to the arrival of European people in North America and go forward from there. As a result, more than a third of this novel consists of a novella about a war in the 17th century. This old war prompted seven novellas that are scattered throughout the series.

If you read this novel, you'll also find stories my imagination showed me set during a failed war in an imaginary Asian country that I call Kulon. You'll also find a more contemporary story about the struggle against a sociopathic cult called the Scythians.

I should say something about the word "Witnesses", which I think of as having several senses: a witness observes events that take place outside him or her, a witness gives testimony, as in a court of law, a witness describes what she or he knows, and there are witnesses who make public statements about what they believe to be true.