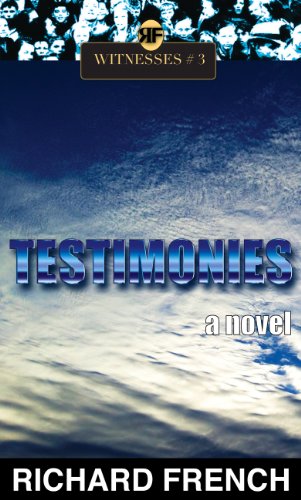 about this book: "Testimonies" is the third novel in a series called "Witnesses". As is the case with the other novels in the series, armed conflict and its after-effects are at the centre of several narrative threads:

---the slow unravelling of an imaginary but highly dangerous cult called the Scythians
---three stories about American soldiers who take part in a losing war in Asia
---two novellas that feature descendants of the 17th century native warrior Sansonoit as they make their way in the majority culture
---more about the lives of Paul Kingsley, who wrote the stories and the novellas, and his family and his campaign to thwart the Scythians
---more about Stephanie Markham, the editor who brings the various stories in the novel together and who also battles the Scythians.

The word "Witnesses" here refers to people who tell about their experiences and what these experiences mean for them. One of the main purposes of "Testimonies", like the rest of the series, is to advocate on behalf of our ability to reflect and interpret, which our fast-paced society, attuned to questions of money and power, often pushes us to neglect.