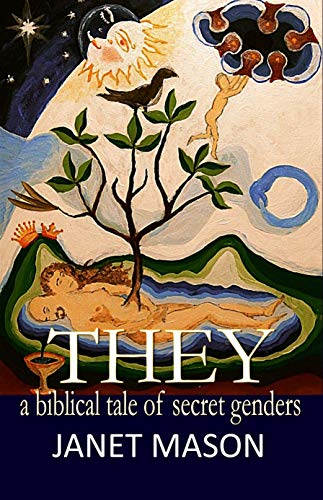 Book: They - A Biblical Tale of Secret Genders by Janet Mason

about this book: • "Whether you have read the bible, went to Sunday school or seen the films, the stories in the old testament come alive in a slightly mad mix of allegory and symbolism. Mason merges together tales from the ancient Hebrew Bible with modern concepts which speak to the world today, exploring gender and sexuality in a fun story that brings out the humanity of the characters we may never have identified …" — Curve Magazine (Australia)

I was inspired to write my novel THEY, a biblical tale of secret genders (Adelaide Books -- New York/Lisbon; 2018)by several different factors that came together. I was becoming a Unitarian Universalist and a lay minister as well as taking a yoga class for the first time. At the same time, I met a young person on my block who transitioned genders at the age of five to become the happy and healthy little girl that she always was inside. Her mother told me a story about leaving her church in tears when another woman at the church made a critical comment about her child. I wrote this book because I wanted to write something meaningful that would make a difference. The primary readers are those in the LGBTQ community and allies who are open to different interpretations of religion.