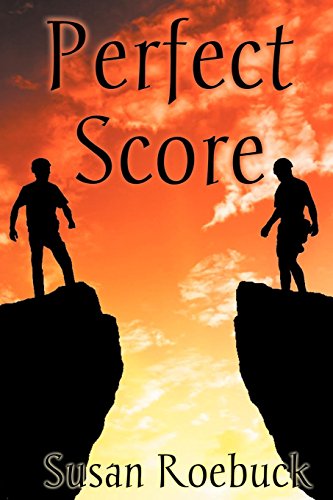 about this book: Perfect Score is the story about overcoming almost impossible obstacles. Set in the US MidWest in the late 1960s, early 1970s the story features two young men from different sides of the tracks: Alex is a spoiled rich kid, and Sam who grew up on the streets. Alex is heading for a successful career as a rock star but alcohol and drugs, combined with his own specific childhood traumas, make him a fragile character on a downward spiral to failure. Sam has been hit so many times by life that a lesser mortal could never survive. However, he manages to fight back and rise like a Phoenix every time. His two aims in life are to pay the medical bills for his disabled sister, and to hide from the world his speech/reading/writing disability, and he has no time for a selfish guitar player.

Even though Alex is flawed, his love for Sam never wavers.

Questions need to be answered: Just why did Alex's evil uncle adopt him at age eleven yet deny him any affection? And what's the mystery behind Alex's father's death? Both men seem to face unbeatable odds. Are they doomed to follow separate paths forever?

Like most of my writing, the main theme is not necessarily the romance between the two men, but injustice and corruption and the power of love to overcome all.

Although the book is set in the States, I'm not American - I'm British. But I have spent a lot of time in the States, especially Upstate New York which is where Perfect Score was first set. Once you've read the book, you'll find that statement very odd indeed!

It was an EPIC 2012 e-Book Award finalist in the Mainstream category. And it received an Honorary Mention in the 2011 Rainbow Awards.