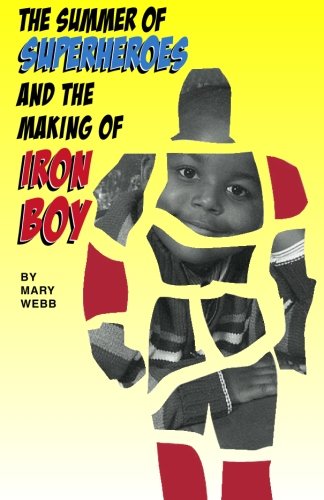 Book: The Summer of Superheroes and the Making of Iron Boy by Mary Webb

about this book: The title of this book refers to the summer of 2008 and my then-5-year-old son Quentin, who was and will always be my hero. See, Quentin battled leukemia and put up an amazing fight like only a superhero can. He is the world's first-ever cord and placental blood transplant recipient, all courtesy of his little sister Jory, an unexpected pregnancy. Sort of a superhero herself. Iron Girl, I guess you would say.
When Quentin was first diagnosed the summer before, he immediately went into remission. A week later, it was deemed he was in the highest bracket for the disease to return, which would have cut his chance at survival tremendously. A transplant would be necessary. His doctors decided to wait for his sister's birth to see if she would be a match, as full siblings offer the best chance of a match. In the meantime, his cocktail of drugs was changed to the harshest combination possible. Amazingly, he was hardly ever sick.

Transplant was a different story. The procedure -- such a fragile process -- wreaked havoc on Quentin's body and emaciated his frame. It threatened to destroy his spirit, too.

But, not without a fight. That summer he was in good stead with Ed Norton as The Incredible Hulk, the late Heath Ledger as The Dark Knight, Emile Hirsch as Speed Racer and Robert Downey Jr. as Iron Man. While that's a noteworthy bunch, in my book (pun intended), there was an ever bigger superhero making a debut that year. In the midst of the Iron Man hype, my friend Adrienne, herself a survivor of sorts, sent Quentin an action figure during one of his hospital stays. I'll never forget how she inscribed the card because it really set me to thinking. It said, "An Iron Man for an Iron Boy!"

Two-thousand-eight was definitely the summer of superheroes and the making of Iron Boy.