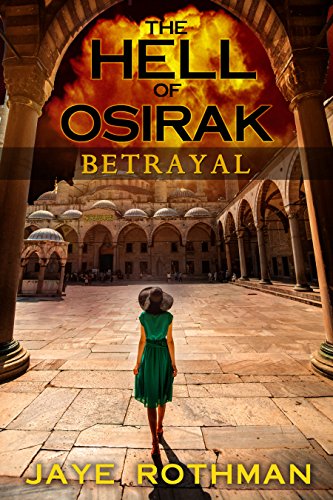 Book: The Hell of Osirak (Betrayal, Redemption and Salvation Trilogy) by Jaye Rothman

about this book: This is a book based on a true story "Operation Opera, and it has a very strong lesbian theme running through it. It's an espionage thriller featuring British agent Nikki Sinclair and Mossad spy Dvora Bar Zahavi, who re-kindle their relationship after an absence of seven years. The sparks fly again!

The same incident in the book that I describe actually happened to me in Kinshasa some years ago. I always thought it would make a great idea for a book.

I also wanted to write a book that I would like to read that featured strong lesbian characters who are happy with their sexuality.

The book has taken about 16 months from the conception of the idea, to the actual thrill of publishing it, and I love hearing people's reactions to it. Writing it has been one of the coolest things I've ever done!

The cover was my idea, I wanted people to look at it, and think, "I want to read this book." I hope I've succeeded and you, the reader enjoy it!

(If lesbian sex offends – it may not be a good idea to read it!)