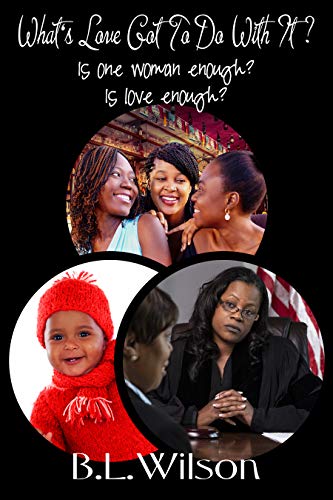 Book: What's Love Got To Do With It? - is one woman enough? is love enough? (Songbook Book 1) by B.L. Wilson

about this book: In this age of social media, short-term relationships and instant gratification, I wondered what a long-term, lesbian friendship of twenty years looked like. How did the women meet? What would the women involved be like? Would they be saint-like women? Once these saints were engaged or married, they never ever looked at another woman and thought. "I want me some of that!" Or would the two friends be devilish women who wanted to sleep with every woman they saw? And tried to do so.

What attracted the two women to each other in the first place. Why did they decide to become friends? The two women in question dated twenty years ago. They became friends when the dating thing didn't work out for them.

One of the women, Bianca was an attractive, charming single philanderer who loved women and lots of them. She dated Ernestine who later became her best friend and several other women simultaneously. Bianca's unfaithful behavior hurt Ernestine who believed Bianca was the marrying kind. When Ernestine discovered Bianca's infidelities, she decided she couldn't trust another partner ever again. She became lucky in business but distrustful in her life.

Meanwhile Bianca never wanted to be married. She loved the single life. Once they accepted who each other was, they became the best of friends. However, as the two women have grown older, Bianca had come to accept the role she played in Ernestine's lack of trust of other people and women specifically. She decided to change Ernestine point of view.

I wondered how difficult Bianca's new mission to help Ernestine learn to trust folks again would be. I decided to examine how Bianca would change Ernestine's viewpoint and whether Bianca's womanizing ways would change too. I answered those questions and more when I wrote What's Love Got To Do With It?

Video: What's Love Got To Do With It by B.L. Wilson