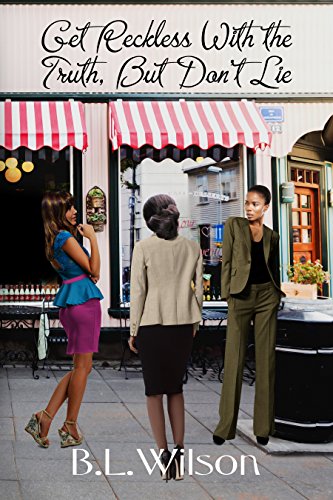 Book: Get Reckless With The Truth - but don't lie (Forever Woman Book 4) by B.L. Wilson

about this book: I know this sounds crazy but I do try to listen when my characters speak to me. I introduced several interesting characters in Two Moons Bakery and Sweet Sarah's Bluez, I felt they wanted me to tell their stories in a novel of their own. That's what I did when I wrote Get reckless with the truth but don't lie.

I wanted to tell the secondary characters' stories. I was particularly interested in telling the story of the two older women from Two Moons Bakery. I wanted to explore their budding romance. How they met. Where they met. What did they do after they met? Would they hook up right away? Or how dates would they have before they ended up in bed? Where did they end up in bed? Did they have friends, children, grandchild or ex-lovers that might interfere with their relationship? How do they handle introducing the new lover to friends and family? What I really wanted to find out if older lesbians were really all that different than their younger sistahs.

I tried to answer all of those questions and more when I wrote Get reckless with the truth but don't lie.

Video: Get Reckless With The Truth - but don't lie by B.L. Wilson