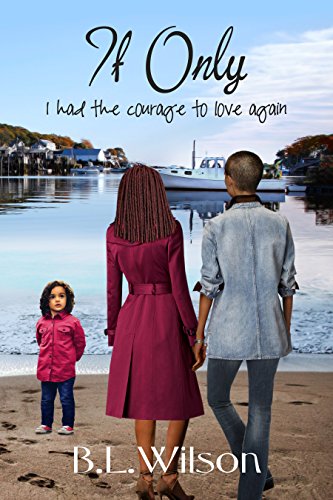 Book: If Only - I had the courage to love again by B.L. Wilson

about this book: When I wrote IF ONLY, I had just broken up with my girlfriend of eight years. To be truthful, my girlfriend had broken up with me. She left me for a woman, some twenty years younger than me. All the while she was backing away from me, she kept claiming nothing was going on between her and the little witch. I knew better. Try as I might, I just couldn't do anything about it.

So anyway, another weekend was coming up. I was feeling lonely, depressed and generally sorry for myself. Thank God for my friend She-she and her two friends who invited me to hang out with them in the West Village. We stopped by the LGBT Center, Henrietta Hudson and Crazy Nanny's (which has since closed). Somewhere between the three places, I spotted this tall, bald, well-built, brown-skinned woman about the color of a ripe pecan.

She wore fitted blue jeans over a nice ass, a white t-shirt that emphasized pretty breasts, black boots, and large hoop earrings. Goddamn the woman looked so sexy I wanted to leap out of Sheila's caddy and follow her down the street! I wanted to ask her name then find out if she had a woman. Where she lived. How she lived and what she did and anything else I could think of just to keep her talking to me. In my mind, I imagined a lengthy conversation. She'd find me humorous and oh so intriguing to talk to. We'd exchange phone numbers then set up a dinner date and more good things to come.

Alas, I was too shy. I just sat in the back of Sheila's caddy watching her saunter on down the street and I thought IF ONLY, I wasn't so….

Video: If Only by B. L. Wilson