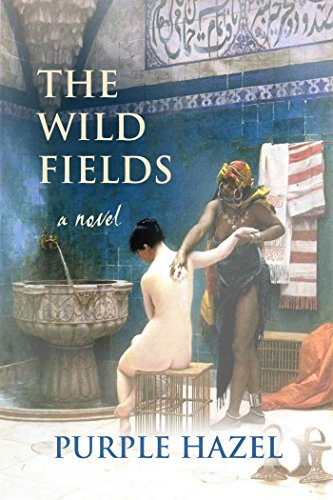 about this book: The Wild Fields is our SECOND full length novel and for this book we decided to devise a lesbian romance between two Russian girls who grow up in vastly different circumstances then fall in love during the terrible events of the Russo Crimean War and Great Tatar Invasion of 1571.

The idea for The Wild Fields came to King while he was researching another book called Free Company which we'll publish next year. Studying the history of white slavery and slave markets in the Middle East, the name Caffa kept coming up as an example of the world's most notorious venue for the sale of beautiful young Caucasian women and girls during the 16th and 17th centuries. Today the city still exists though under a Russianized version of its original title when it was a lone Greek colony on the Black Sea. But King really wanted to spin a sweeping romance this time which told of true love overcoming insurmountable obstacles for two young lovers to finally be together. An historical romance with this as a backdrop seemed just too tempting to pass up.

Using the setting of 16th century Russia and Turkey, we thought, would enable us to captivate our readers and allow us to tell of the horrendous real-life events such as the burning of Moscow in 1571 and what life was really like within the structure of the old Ottoman Empire among the slave classes. Best of all it gave us a chance to tell of the bizarre and intriguing daily lives of common harem girls or "odalisques" as they were referred to in the west. And it allowed us to tell about the tenuous existence of concubines living in the palace of the Grand Sultan in Istanbul.

We didn't stop there either. King researched Turkish culture, Turkish cuisine, and Turkish customs. He even wrote dialog in Turkish just to lend more authenticity to the story. Audiences might enjoy that most of all because the language is truly beautiful. So are the people. We might just spend one of our royalty checks someday and go there just to see fabulous places like Bursa where a lot of this amazing story transpires.

The brutal crossing of the Black Sea on an overloaded slave ship. The horrors of the long, cruel march of over 100,000 terrified captives back from Moscow along the Russian steppe to the Crimea. Images like this we worked hard to depict accurately. And the ravages of war, the brutality of the Tatars and Turkish Bashi Bazouk, plus the immorality and utter absurdity of the oppression of women in Muslim society made for a fascinating story-line. The tales of the two main characters are detailed and described extensively in different plotlines which intersect toward the very end, creating great suspense for the reader hoping that against all odds they'll finally be reunited. We really think you'll enjoy it.

Purple Hazel is…King and Caroline from Denver Colorado, a husband and wife writing team that has produced three full length novels and has a fourth one on the way coming in June 2016. We mostly write Adventure Romance and Women's Erotica; or Science Fiction with some form of romantic angle. Some of it is racy, we have to admit. We can't help it really. We just fell in love and it all came naturally, writing about liberated sexuality, true love, and lifetime devotion. Please check out our other books Star Kitten and Morgana's Handmaid now available on Amazon!