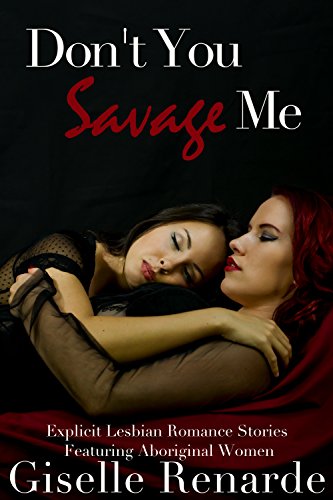 about this book: A special note from the author, Giselle Renarde:

I chose the title Don't You Savage Me as a play on the on the song "Don't You Sweetheart Me." I swapped out "Sweetheart" to kick at the common use of "Savage" in traditional romance titles. I've never been much of a romance reader, to be honest, so I was shocked when I started spotting hoards of backlist titles from popular romance publishers that characterized Indigenous peoples in this way. As "savages."

I'll be donating all royalties I earn on sales of this book to charities allied with Aboriginal women in Canada. Why? Because the RCMP recently released a report on missing and murdered Aboriginal women. There have been 1,181 police-recorded incidents of homicide and unresolved missing women investigations over the past three decades. The United Nations has documented numerous human rights concerns to the Canadian government, including high rates of violence against Indigenous women and girls, and exclusion of Indigenous peoples from effective participation in decisions regarding their rights.

In "Don't You Savage Me," bestselling author of the Rainbow Award-winning novel The Red Satin Collection has bundled together six lesbian love stories featuring Indigenous characters.

There's a little something for every taste, from the sticky-sweet romance between a cop and the girl next door in "Cuff Divers" to the intense heat of "Sugar Bush." Rusidan learns about her girlfriend's heritage in "Traditional Inuit Throat Singing" while Emma encounters a legend come to life in the historical romance "To Dream of Her True Love's face." A group of girls leave Jansey utterly exhausted in the charming bondage story "Knowing the Ropes." Charm or no charm, Dina can't resist rodeo rider Leslie Goosemoon in "Leslie Goosemoon Rides Again."

All royalties earned by the author on sales of "Don't You Savage Me" will be donated to charitable organizations allied with Indigenous women in Canada.