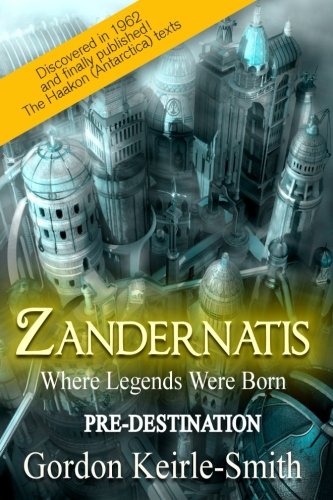 about this book: The first version of "Zandernatis" was written in the early 1970s.

At that time most of my creative energy was channeled into art. I painted in a "visionary" style heavy with symbols and allegorical references. All that changed when I met two superlative artists in London, Johfra and Ellen Lorien, joint founders of the Dutch "meta-realist" movement. I wanted to paint like them – but lacked about 10 years of Art School training... So I decided that instead of using oils and brushes to communicate all the images that crowded my mind I would paint with words instead.

The resulting 180,000 word magnum opus was written shortly after I moved to France in 1973, but was considered "too ambitious for a first book".

40 years later, I decided to revive the work and thoroughly transformed it, adding several new dimensions. In the process it evolved into a whole new genre, known as "Meta-realist allegory" which "transcends the real by creating compelling, fully documented, alternative truths".

This book, Volume One of the Zandernatis Trinity, entitled "Pre-Destination", opens with the sensational discovery of the Haakon Urns under the Antarctic ice in 1962, containing a wealth of material revealing the existence of a pre-glacial civilization dating back many tens of thousands of years. One of the core documents in this amazing library was the epic poem "The Song of Gorin", which has been "retold" in the book. It provides a narrative in which we ultimately learn how the human race came into being, the origins of many so-called legends and the real events that subsequently became known as "The Fall of Man".

This symbolic fantasy is interspersed with a number of contemporary documents (dating from 1962 to the present day) reflecting the controversy stirred up by these revelations. These include press cuttings, transcriptions of radio and TV interviews, analyses by experts, past life regression research and much more...

Readers find these books very compelling and absorbing, opening up their minds to all kinds of possibilities.

For example, well-known actor and renowned reader of classic audio-books for Naxos, Bill Homewood, says:
"Never before ZANDERNATIS has any author demanded that I subscribe wholeheartedly to accepting, as an act of faith, the ethos and actual substance of his work. I marveled at Keirle-Smith's invention."

Penny Kelly, author, teacher, personal and spiritual consultant, adds;
"There are few books that so quickly manage to get the reader to suspend disbelief and then open the mind to the possibility that there might be a new view of history and the world, but "Zandernatis" is one of them. Uniquely creative!"