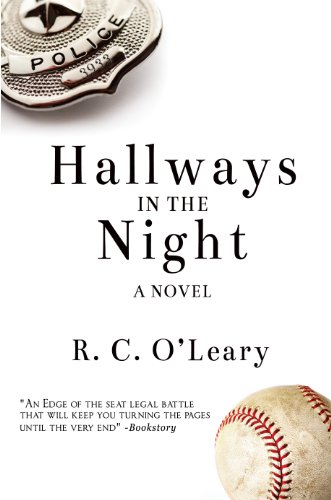 Book: Hallways in the Night - A Novel by R.C. O'Leary

about this book: Hallways in the Night was a true joy to write on many levels. Firstly, I really fell in love with the story and it gave me literally thousands of hours of great "thinking" time, which was a true gift. Of everything I have ever done in life, writing a book was the most intellectually stimulating.

Writing Hallways in the Night was also a revelation to me because it wasn't until I was in my late 30s that I even seriously considered writing a novel. To undertake the task, and be able to complete it, has had a profound effect on who I am as a person. Now "writer" a term I would not have ascribed to myself even five years ago is now central to my identity.

It is often said that reading a book changes the way you look at the world. So does writing one. It has changed my view of the world and I think made me a more empathetic person. Writing has also helped to better understand myself. All the "A-D-D" type moments I had in my life were probably the result of having a mind wired to write. I am very grateful to have discovered that I enjoy writing.

Writing a book has also convinced me that part of life is trying to expand your talents and find things inside you that you may not even know you have. I encourage everyone to pursue different avenues of interest and find part of your future identity which may seem unlikely when you begin to pursue it.

As for the book Hallways in the Night, the story has been well-received. It's a legal thriller with what I would categorize as a a lot of extra elements. One of the things I'm most proud of is the way that race is handled in the book. The fact that several characters are African American I believe adds an extra layer of interest and authenticity to the story.

I also like the fact that I was able to think up and incorporate several plot twists. I hope that Diane Donovan is right as she states in the Midwest Book Review that Hallways in the Night will keep eve seasoned readers guessing until the last page.

When writing HITN (the acronym which I usually refer to the book) my number one goal was to make it an enjoyable book for readers. I feel, at least based upon pieces of feedback I have received, I was able to achieve that goal. One of the more common feedback I have received is that people have become "hooked" when reading it. Most people seem to be finishing the book in less than three days.

I truly hope that if you have read this far into my "take" on the book you will take the plunge and give it a read. If you do, I would be honored that you have invested your most valuable resource in the book--your "time"-- and I want you to know I value it. I hope as you read the book you will be able to tell how much time, effort and heart I put into writing the book and that you will know how much I respect those who read it. Feel free to reach out to me anytime with your feedback.

Thank you in advance and you have my sincere hope that this will be a read that is a great experience from start to finish.