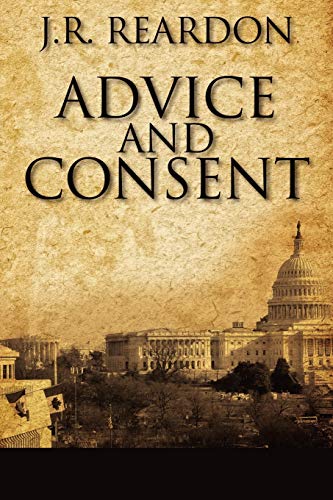 about this book: ADVICE AND CONSENT is the third installment of author J.R. Reardon's Rebecca Tameron Mystery Series, the first being CONFIDENTIAL COMMUNICATIONS (2008) and the second, DISHONORED (2010).

About ADVICE AND CONSENT ...
"What if the key to stopping a wave of terrorist attacks against the U.S. Government lies in a 13 year old girl who is too terrified to talk???

US Supreme Court Justice Sean McNaught, the crucial swing vote on a divided court, has decided to retire, and it is up to President James Cotson to find his replacement. The President's search is plagued with problems: protests have sparked across the country as a heated appeal involving illegal immigration races down the pipeline; his first two nominees are rejected and a wave of terrorist attacks target Supreme Court Justices, members of Congress and eventually the President himself.

During this national crisis, 13-year-old Angelica Hernandez sits in the courtroom of Judge Rebecca Tameron in the Federal District Court of Vermont, waiting for the sentencing of Gedof Maradon - the man who brutally attacked her. Maradon fails to appear, and Angelica, who knows more secrets about Maradon's crimes than she has told, is in grave danger. What secrets does Angelica know? Who can protect Angelica? When those we trust betray us, where do we turn?"

If you are ready to leave your comfort zone, check out ADVICE AND CONSENT today!