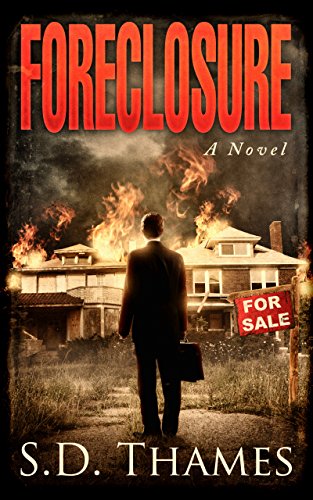 about this book: Foreclosure is an offbeat legal thriller about David Friedman, a misguided lawyer struggling to make partner during Florida's housing crash of 2008. It should appeal to fans of character-driven crime novels and legal thrillers, as well as fans of contemporary mainstream fiction. The novel takes a penetrating and cynical look at the role greed and lawyers played in Florida's housing crisis.

Although the events portrayed in the novel are fictitious, I was inspired to write this book as a result of working through the housing crash as a litigation partner at a national law firm in Tampa. The mortgage crisis produced waves of difficult and costly litigation, and at times it seemed the lawyers were the only ones profiting from the mess. I also took inspiration from my frustration with the lack of professionalism in the legal field. Over the years I've seen so many lawyers who approach partnership as their idol, a goal they're willing to pursue at the risk of losing their friends, families, and even their souls. One of the central questions David has to answer during the novel is whether he in fact has a soul. The epigraph quotes a few lines from the prophet Jonah—the one who was swallowed by a great fish—and at the novel's climax, David actually awakes to find himself, so he believes, in the belly of a great fish. You'll have to read it to see how that plays out.

The element of the book that I probably most enjoyed writing was incorporating references to blues music, particularly Stevie Ray Vaughan. David's dad was a blues guitarist who died while David was in high school. Growing up, David wanted to follow in his father's footsteps, but the practice of law hampered his musical ambitions. Throughout the novel, David's haunted by his father's past and a mysterious '67 Stratocaster that David bought with his last bonus but cannot bring himself to play. I am grateful to the Estate of Stevie Ray Vaughan for granting permission to quote a few of his songs in the novel.