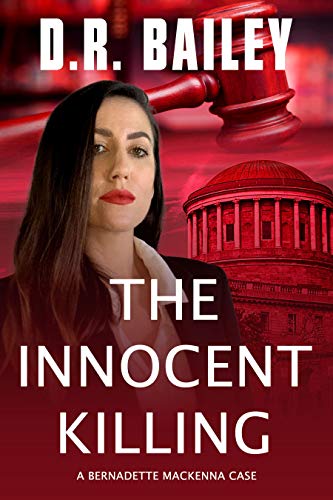 about this book: Having published four crime novels in the past year, D.R. Bailey has now ventured into the courtroom with "The Innocent Killing." D.R. Bailey has taken a character from one of his crime novels and given her her very own series. Introducing Bernadette Mackenna, successful top criminal barrister practicing law in Dublin from her own firm. Bernadette is a feisty tough lady in the courtroom but at the same time has a softcore of vulnerability and insecurity the public doesn't get to see.

In this first gripping novel of the series, Bernadette is faced with two challenges, one in her personal life and the other her professional one. The victim of a kidnap has killed her kidnapper and is charged with murder. Getting her client acquitted is going to take all the skill Bernadette has and even she isn't certain she can do it. At the same time, she makes a new conquest who might perhaps become her new girlfriend. Will Bernadette overcome her own insecurities to allow love to flourish? Bailey's novel delivers on all fronts, with great characters and an engaging, intriguing storyline.

Bailey likes to push the boundaries and is a big supporter of LGBTQ+ rights. Bernadette's character was perfect for a foray into this genre and Bailey's novels always contain strong romantic themes which are also central to this first novel. Bailey makes his characters believable and we enjoy their warp and weft of their lives. This new series is a great complementary addition to Bailey's DI Gallway novels. Bailey's fans will enjoy this outing, the first of many more to come. Bailey's novels have great appeal in Ireland and beyond.