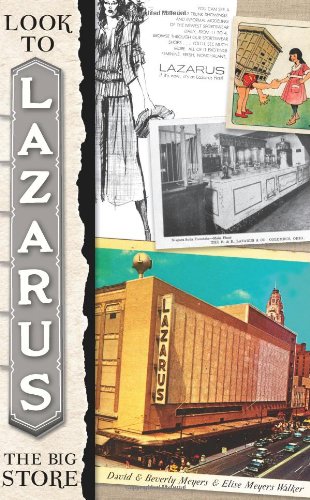 about this book: During the "Age of the Grand Emporiums," the F&R Lazarus & Company was the gold standard. For more than 150 years, this uniquely Midwestern department store was the heart of downtown Columbus, Ohio. Headed by the "first family of American retailing" with an eye for flair and a devotion to the customer, Lazarus won the hearts and minds of a community. At its height, Lazarus controlled one-third of the retail activity in the city, a feat that no other store in the country ever matched. To Fred Lazarus Jr., it was "a big circus" that would attract thousands of customers by offering 100 special events every day!

LOOK TO LAZARUS: THE BIG STORE draws on the memories of those who worked and shopped in this retail Disneyland to tell the unlikely story of a love affair between a city and a store. It was a love affair born of the solemn promise "You can always take it back to Lazarus – no questions asked." The 192-page book is filled with historical facts, colorful stories, 85 pictures, and 6 of the most popular recipes taken from the Lazarus restaurants and its celebrated cooking school, La Belle Pomme. An entire chapter is devoted to Christmas at Lazarus with the story behind the creation of the popular window displays and the Santa Claus parade. Even Robert Lazarus Jr. said he learned some things he never knew about his family's store.