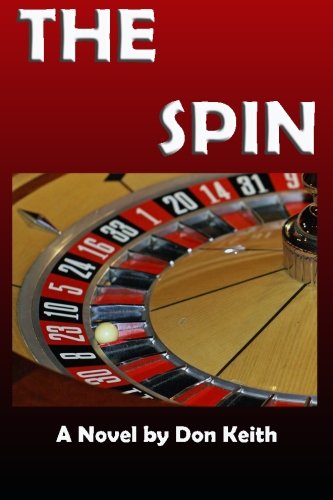 Book: The Spin by Don Keith

about this book: I was playing blackjack one night in Las Vegas when I witnessed an unusual sight at the roulette wheel nearby. A man put $10,000--the casino maximum wager--on one spin of the wheel. He lost. But that planted a seed in my writer's brain. Years later, a friend of mine mentioned an idea he thought I should explore about a desperate man who decides to risk all he has on one spin of the roulette wheel.

That's a sign when the idea comes up twice! The resulting novel is about Jerry Gray, a working man who has had everything possible go wrong in his life. His father has died, leaving big medical bills. His daughter has a rare cancer and is near death, with health insurance maxed out. His wife has left him and taken their daughter because--in the wake of all those troubles--Jerry has gone into a protective shell, trying to shield them from all the misery. Then he loses his job.

In desperation, Gray decides to sell everything he has, cash out the 401K, and risk it all on one spin of the roulette wheel at a tiny, out-of-the-mainstream casino in Vegas. When his seemingly foolish risk accidentally attracts the attention of TV and newspapers, Jerry's quest becomes not only a media circus but a crusade for thousands of others who are also seeking to break out of their own bad situations. Many join Jerry and others on a parade through the desert. Among them are a beautiful, talented but frustrated singer whose self-imposed limits are squelching her dreams, Jerry's co-worker and best friend--a man with his own secret albatross--a newspaper reporter who is also a would-be novelist but one who can't seem to get past chapter 3, and a true child of the '60s whose quirky but wise outlook on life inspires them all.

Along the way, though, many of them realize that The Spin is actually much more than just one man's desperate gamble. The outcome leads them to finally make their own heart-over-head decisions in life so they can ultimately realize their own dreams.

And I hope this story will inspire readers to do the same.

• "I still can't stop thinking about some of the ideas and the characters. A book that is this much fun to read and makes you think like this--it's a winner." — Reader review on Amazon.com