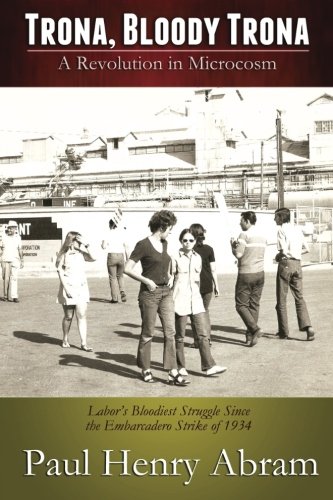 about this book: Trona, Bloody Trona is a must read for anyone that craves adventure, suspense, romance and working class heroes! This gutsy tale by a former NSA Spy has shootings, bombings, UFO's, a "reign of terror", and lots of everything that was the 60's and 70's. Join an outlaw lawyer as he romps through the town of Trona, the "Gateway to Death Valley" with his 750 Longshore clients as they battle the world's largest conglomerate, Kerr-McGee - you remember them, in 2 years they would murder Karen Silkwood. Top it all off with a bunch of gun-happy goons hired by the company to break the union - they were called "Wackenhuts" then, the forerunners of "Blackwater". The book has been hailed as a recount of "Labor's bloodiest struggle since the Embarcadero Strike of 1934" and likened to John Steinbeck's "Grapes of Wrath". During his representation of the union in Trona, the author recalls his days as an NSA Spy which included his witnessing the murder of the U.N. Secretary General Dag Hammarskjold, and the murder of several Navy Pilots by the U.S. Navy. Guaranteed to thrill or your money back!