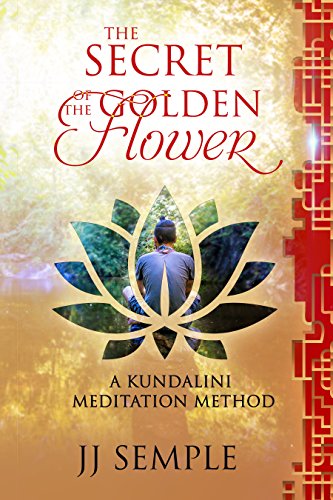 Book: The Secret of the Golden Flower - A Kundalini Meditation Method (GFM Book 2) by JJ Semple

about this book: Since the publication of Deciphering the Golden Flower One Secret at a Time (ASIN: B001A9TN7Q) in 2008 (DGF), readers have asked for an in-depth guidebook on using The Secret of the Golden Flower (SGF) to awaken kundalini in a manner, and with results, similar to those described in JJ Semple's DGF.

The Secret of the Golden Flower: A Kundalini Meditation Method is that book, a much anticipated intepretive guide to the SGF as well as a sequel to his DGF autobiographical kundalini memoir.

Kundalini is the formative, biological life force energy in your body. In its creative state, it's known as Kundalini Shakti — creative in the sense that it shapes your very substance in the womb. After birth, it works in the background. And unless it reactivates involuntarily or you reactivate it intentionally through the practice of a reliable method like Golden Flower Meditation (GFM), it remains in the background throughout your life.

Think of it like a racing car that's idling; the motor's turning, but it's not going anywhere. That's the maintenance aspect of kundalini, known as Prana Shakti. It manages your autonomic functions: cell division, breathing, blood flow, digestion — without you're being aware of it or appreciating it. Like a computer routine that works in the background, it's there. If it stopped working altogether, you'd be dead.

Most people don't realize that kundalini resides within them; they are simply unaware of its actuality and its potential. Which means, of course, that it may never "re-activate" either spontaneously or otherwise, not unless they learn how to induce a Kundalini awakening through meditation practice. Even then, the outcome is never certain. There's a quantum or karmic aspect to the process.

The Secret of the Golden Flower: A Kundalini Meditation Method is a guidebook to using The Secret of the Golden Flower as a meditation method for activating kundalini. Wilhelm, Cleary, and Jung translated the book and commented on its teachings, but not one of them ever practiced the method. This book compares their translations and commentaries with JJ Semple's empirical practice of the method, using his ultimate success in awakening kundalini as the arbiter of its suitability as a method — in essence, the author identifies where the written word deviates from actual practice. He extracts the workable teachings from the esoteric text of the SGF and shapes them into a practical modern method. By cross-referencing both the Cleary and the Wilhelm versions, the author details each version's contribution to the kundalini awakening process. A chapter comparing Golden Flower Meditation (GFM) to the Microcosmic Orbit (MCO) is also included.