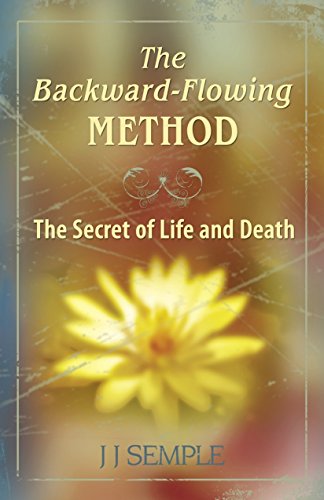 Book: The Backward-Flowing Method - The Secret of Life and Death by JJ Semple

about this book: For centuries, man has explored the body, gradually learning about its various subsystems: respiratory, cardiovascular, skeletal, digestive, muscular, etc. The more physically "obvious to the naked eye" the subsystem, the more visible it was, the easier it was to locate. The lymphatic and endocrine systems were less visible, therefore, they were "discovered" relatively recently. That doesn't mean they weren't there all along.

Another subsystem that's "been there" all along and is responsible of bodily substantiation (development of the fetus during gestation) is Kundalini. It belongs to an even more "invisible" subsystem, known as Chakras, or energy centers. Kundalini is an evolutionary actuality, a biological reality present in every living body. Unlike the more well-known subsystems of the body, however, kundalini becomes dormant at birth. It can be activated by various methods related to meditation and yoga.

One method for activating kundalini involves the backward-flowing method, a technique alluded to in 'The Tibetan Book of the Dead' and 'The Secret of the Golden Flower,' two respected texts that discuss and explain the effects kundalini induces, namely:

• Correcting physical defects, rebuilding and healing the body, self-healing;
• Rejuvenating the body and retarding the aging process;
• Reversing self-destructive and addictive behavior;
• Heightening and enhancing consciousness to the point of effecting release from Karmic bondage;
• Understanding the role of consciousness in ontology and human cosmology;
• Facing death without fear and facilitating the transition into the next state of being.

"'The Backward-Flowing Method: The Secret of Life and Death' addresses the universality of man's spiritual achievements and shows us how they are grounded in our biology," says the author, "It's hard to believe that the awakening of the metaphysical is really a product of physical activity — the awakening of the kundalini subsystem. That the practice of Yoga techniques, which at first, seem purely physical in nature, actually lead the practitioner into the metaphysical realm where, once there, we experience the realization that biology itself is an only an expression of consciousness.

"This book is about perfecting the body in order to transcend it, in order to develop and maintain perfect health, greater consciousness, and mental awareness right through the golden years. And beyond that — into the next incarnation."

Authors like Gary Osborn describe the Chakras as "metaphysical counterparts to the endocrine glands." However, claims such as this are always followed by disclaimers such as, "these associations have never been scientifically verified." Nevertheless, Kundalini, as a byproduct of refined Chakra energy, is part of evolutionary biology, even though its presence — much like the Lymphatic and Endocrine Systems in the past — has not yet been detected by outside observers. Doesn't mean that it doesn't exist, only that it hasn't yet been officially discovered...except by the millions that have actually awakened it. This book is dedicated to them.