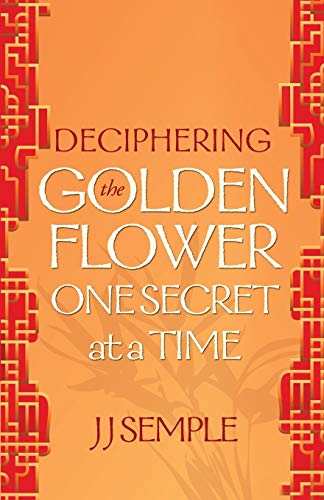 Book: Deciphering the Golden Flower One Secret at a Time by JJ Semple

about this book: This book is an autobiographical account of my kundalini experience that describes, not only the experience itself, but also the events leading up to it as well as its effects on my person. It starts during childhood, takes me to HS graduation to college, to the USMC, to college again, to work, to travel through many countries, and finally to work again — years 7 to 50. Before kundalini, I had not found anything substantial in life — nothing to believe in, nothing to work for. I had no clue that a biological phenomenon like Kundalini existed or that I could arouse it through the practice of meditation.

Says one Amazon reviewer: "JJ Semple's book reads like an Old World romance movie. I am surprised by how good a writer he is. The book brings to mind images of smoky Parisian cafes, beautiful yet mysterious women, countryside charms that are remote and of another world. Somerset Maugham himself could have been sipping tea with the author at some point, debating the finer points of writing and breathing, with Anais Nin listening in from the next table."

There's another reason I wrote this book as a memoir: I wanted to document the difficulties the westerner faces in even getting to the starting point of the self-actualization process, especially in the late 1950s when my quest began. I have Indian and Chinese friends who grew up with meditation and Yoga practices all around them. I had never heard these words until I was in my late-twenties. Even when I finally did, there was very little information extant. This was forty years ago, before the proliferation of books and videos on spiritual practices. As for Kundalini, I didn't hear the term until after I had activated it and a force field of energy within my own body — previously unknown to me — swept over me.

In writing this book, I decided not to separate the journey from the destination. Yet, choosing not to separate the journey from the destination — I never intended to — has sparked a wholesale discussion of my approach. A few readers only wanted information on the method I used, effectively bypassing the frequently perilous, and often circuitous, route I'd taken to get there, not to mention the years I'd dedicated to learning to live with this amazing biological subsystem within each of us. What a waste, not to pass this knowledge on, especially when learning to live with kundalini demands such a high degree of mindfulness and adaptability. Kundalini is an evolutionary breakthrough capable of modifying DNA in a single lifetime; every aspect of it needs to be documented. There are many methods for activating kundalini. But there are few detailed accounts of successful arousals that highlight the before, during, and after of the process.

Should the journey be considered part of the experience — in this case a Kundalini awakening? Does the effort to attain something count in the end result? Should the means enjoy the same weight as the ends? Beyond the fact that the journey is usually a humanizing experience, there's the ultimate question of: What is the destination? Miracles, super powers, bragging rights?

As Ramana Maharshi said, "I would like to tell you something which is probably not known in the West, I mean especially to the younger generation. There is not a single mention of miracles in the Upanishads, which are the fountainhead of all metaphysical and spiritual thought in India." My journey is living testimony to his words. Kundalini fulfills the evolutionary impulse in every human being; it has nothing to do with miracles. We have enough challenges facing us in everyday life. Challenges we must solve without wanting for miracles. By reprogramming our DNA, Kundalini points us in the right direction for finding solutions to challenges we face.

Deciphering the Golden Flower One Secret at a Time is more than a discussion of biology, evolution, or mindfulness; it's a street level account of finding oneself in the modern world, the definitive tell-all journal of obstacles met and overcome on the path to activating Kundalini. I don't leave anything out: A childhood accident that robbed me of my talents and memory, my battle with drugs and alcohol, my slow deterioration and eventual disequilibrium. The young girl in Paris who gave me a copy of The Secret of the Golden Flower which led to my discovery of Kundalini meditation — the energy cultivation techniques — that actually overhauled certain aspects of my anatomy and metabolism, a wholesale biological retrofitting that opened up a consciousness of unlimited dimension. Deciphering the Golden Flower is a full-circle account of self-actualization, involving a lot of detective work on my body and my psyche, which culminated in my meeting with Gopi Krishna in Kashmir, summer 1977.

Says Dennis Littrell, top 50 Amazon reviewer: "Let me say that this is a superbly written memoir. Semple's narrative command might invoke the envy of a best-selling novelist. And his facility with the language, his ability to effortlessly (or so it seems, without effort) to find just the right word or expression to make his story vivid and engaging for the reader is highly admirable."

Video: Deciphering the Golden Flower One Secret at a Time by JJ Semple