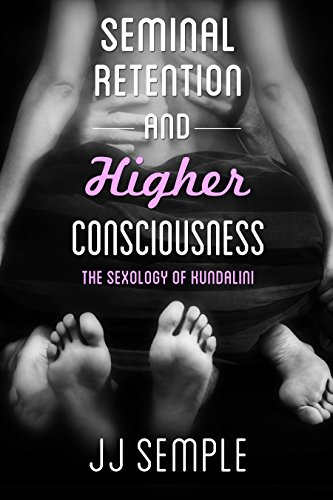 Book: Seminal Retention and Higher Consciousness - The Sexology of Kundalini by JJ Semple

about this book: As a result of my writing three books on mediation and kundalini, I have been invited to give presentations to various groups on my books and their underlying subject matter. During the Q&A sessions, I noticed attendees asked many questions about the sexual aspects of activating and living with kundalini, including personal questions about my sex life, ranging from:

• How many times a week did I consummate sexual relations?
• Was I able to hold back from ejaculating?
• Did I ejaculate prematurely?
• How many times a week is optimal?
• Did kundalini facilitate communicating about sex with my partner?
• Did ejaculation have a debilitating effect on my body that I could instantly feel?
• How does seminal retention work?
• At what age should a person think about giving up sex in order to activate kundalini?

I felt I could be open about my experience and the effect of kundalini on my sex life. We discussed seminal retention techniques, the whys and hows of practicing them. I noticed that many questions came from women who were eager to learn if these techniques might help prevent premature ejaculation, not only for men with an active kundalini, but also for men without one.

That got me thinking about writing a new book dedicated to this specific issue. Seminal Retention and Higher Consciousness: The Sexology of Kundalini not only addresses the above, it also makes the following case for the preservation of sexual energy.

In the East, seminal conservation is recognized as a prerequisite for success in practices that lead to activating Kundalini. The thought is that sooner or later, as one matures, an individual might want to practice energy cultivation techniques such as meditation, mindfulness, yoga, and Tai Chi in order to expand consciousness. Therefore, semen, and cervical fluid in a woman, must be conserved. And to conserve it, one must retain it. How is this accomplished?

First, certain breathing techniques that actually distill sexual fluids into powerful Prana, or psychic fuels, must be mastered. Second, specific seminal retention exercises are used not only to conserve semen and cervical fluid, but also to forestall premature ejaculation and enhance the delights of each partner. Third, kundalini meditation draws distilled sexual energy (psychic fuel) up the spine into the brain (a process known as sexual sublimation). Fourth, this distilled sexual energy actually starts a process of neuroplasticity in the brain (the brain and all of its cellular components are renewed and reinvigorated).

Why is all this useful?

Fifty years ago, women did not expect to orgasm; today, they do. Sex roles do not merely echo social convention anymore (Victorian Prudery vs. the Sexual Revolution); they now evolve as a result of research in Sexology, "the interdisciplinary study of human sexuality, including human sexual interests, behaviors and function."

Fifty years ago, men didn't much care if their partner was satisfied during intercourse; today, they have to care, for sex, along with money, is the reason for the ever-increasing divorce rate.

And finally, 50 years ago, not many people knew about the relationship between sexual fluids and higher consciousness. The New Age, if it's taught us anything, has validated this biological fact. Not only have the writings and practices of ancient masters been authenticated by thousands of new initiates, but universities have also started to research the techniques and effects of meditation.

The things we didn't know or understand 50 years ago actually inhibited human evolution. Now, as thousands take to the practice of kundalini meditation and yoga, there has been a jump-start in the effect of this practice on the capability of the human brain, which bodes well for conquering stress, as well as the effects of old age and other brain deteriorating illnesses like Alzheimer's and dementia.