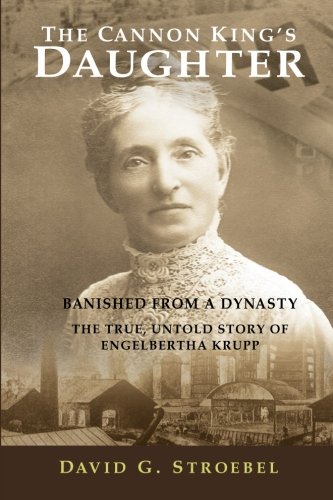 about this book: The Cannon King's Daughter is the true, untold story of an investigation conducted by a New Jersey man into the true identity of his deceased, German-born great-grandmother who lived in Jersey City, New Jersey and whose name was Engelbertha Krupp. She was banished and disinherited from her wealthy Krupp dynasty family for not obeying her father's orders not to marry a poor, shoemaker employed at the Krupp estate in Essen. Fourteen revelations passed down through five generations by five family relative's support the author's finding that his great-grandmother was banished and disinherited from Germany's 400-year-old steel and munitions dynasty that armed Germany through two world wars. Two years of intense research unearthed century-old photographs, documents and revelations from relatives and one key photograph from the Krupp Archives in Germany of Engelbertha Krupp showing Engelbertha sitting next to her mother, Bertha Krupp. Was she Germany's, "Anastasia?"

I was inspired to research my family origins upon the death of my Aunt Gloria Stroebel Bekker in 2007 and whom I'd never met. I felt very guilty because she sustained very serious head injuries in a crash in 1966 and was no longer able to comprehend the world around her as we knew it. Having never attempted to visit her during my lifetime, I felt very guilty about that. Her death motivated me to begin researching my family origins in New Jersey and Germany. The primary readers of my book are World War II and German history enthusiasts. The book took 10 months to write, minus the time devoted to research. I came up with the title, "The Cannon King's Daughter: Banished from a Dynasty, the true, untold story of Engelbertha Krupp," as a self-descriptor. The, "Cannon King," was my great-great-grandfather, Alfred Krupp and the title was also an announcement that, surprise, he had a daughter and that I uncovered what he did to her.

My book is a pay-back to him. It tells him that he did not get away with this and his evil deed has been uncovered after 136 years. The hardest part of writing the book was learning all about genealogy and where to find very old information. It was a steep learning curve to locate sources of information like getting an English version copy of the law that existed in Prussia is 1874, the year I pinpointed the banishment of my great-grandmother. I used a photograph I consider the "smoking gun," and strongest piece of evidence I've found- An 1868 photograph of my great-grandmother sitting with her parents and brother. Her resemblance to both parents in the photograph is undeniably and unquestionably strong to both parents. I also used all 14 revelations given to me by relatives I'd never heard of before I began my research including revelations of a very large unexplained trail of money whose origins are from Alfred Krupp to daughter Engelbertha so that she could immigrate to the United States with. This sum still exists today in a form of a trust fund for two living Stroebele descendants in upstate New York. The original sum was valued at between $2-$6 million dollars in 2009 dollars. As far as the cover goes, I did not want to make the cover complicated, so I chose a photograph of her taken in 1906 when she was living in Jersey City. I added a Nazi swastika as a message to those that I knew about the Krupp history from World War II. I still get questions today asking me if I am aware of the Krupp legacy in World War II.

To my readers: The revelations came first. When I investigated, the photographs and records came after. This is not my story. It is the story as told by my five relatives who passed revelations to me. I wrote this book because I felt it was important for our family to know the truth. My great-great grandfather thought he had contained the knowledge of the banishment of his daughter from public light and the illegitimate son named Wilhelm Lobbert he fathered and discarded overseas. How many other illegitimate children are out there we do not yet know about? He was wrong. No one has the right to take away someone else's very existence by destroying their church records and no church has the right to obey those orders from such a man. I guess I am avenging my great-grandmother's banishment 139 years after the fact.