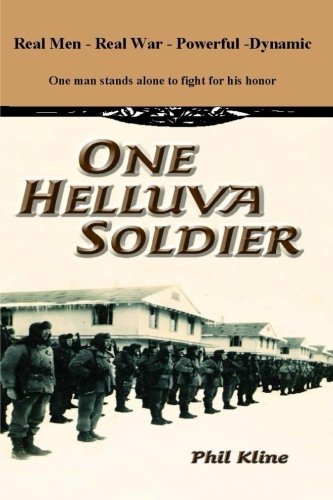 about this book: Inspired by his own and fellow soldiers' experiences in the Korean War, author Phil Kline traveled 18,000 miles to interview and record their stories with the hope that the sacrifices they made would never be forgotten. One Helluva Soldier follows the experiences of a 21 year old Officers Candidate School graduate and his comrades, many of whom became prisoners-of-war, some of whom paid the ultimate price. With the exception of two fellow officers who wrongfully labeled him homosexual, George Martin became known as one helluva soldier in the eyes and minds of everyone else that served with him. Both labels followed him into a prisoner of war camp in North Korea and eventually, into a court martial hearing where he would face his most difficult test. In spite of his distinguished service, his courage and valor, he was tried by the country he pledged to die for. A forgotten war. A dynamic story that needed to be told in honor of the men that were there.