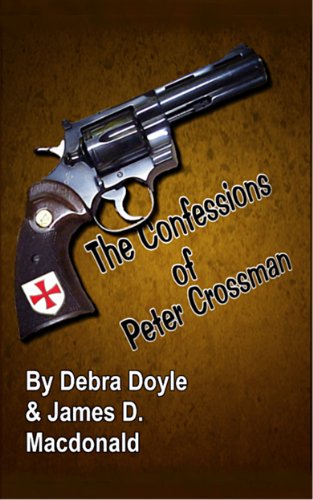 about this book: This is a collection of three short stories dealing with Peter Crossman, a Knight Templar in modern New York, and Sister Mary Magdalene of the Special Action Executive of the Poor Clares. All three originally appeared in various Knights Templar anthologies edited by Katherine Kurtz (they're available as e-books too!), and one of the stories, "Stealing God" has been reprinted several times in other anthologies. Crossman is one of the tough wise-cracking noir-ish detective types. As to the origin: I had twelve years of Catholic education. In the course of that I learned a lot of Catholic esoterica and folklore -- which had to come bubbling to the surface somewhere. I sometimes worry that I have too many Catholic in-jokes.

One of the big challenges in writing the stories was explaining some of the items. For example, again in "Stealing God," a major plot point concerns transubstantiation. For Catholics, this is basic. For anyone else, this may well be baffling. So, we had to explain it to the readers, even though the first-person narrator would know it cold, and believe it to the core of his soul, to the point where he wouldn't even think of it, let alone have to explain it. Particularly as the only characters to whom he could explain it are a bishop and a nun. So that was tricky -- but I think we pulled it off. There's a Peter Crossman novel (The Apocalypse Door) out there, too, and another novel (The Gates of Time) coming out in January of 2013.