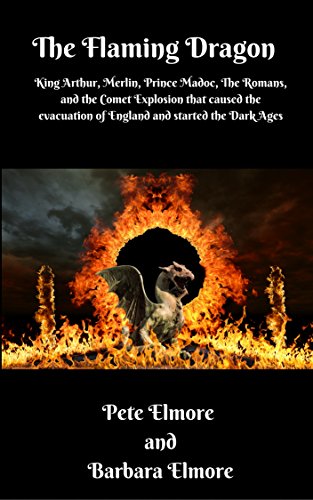 Book: The Flaming Dragon - King Arthur, Merlin, Prince Madoc, The Romans and the Comet Explosion that caused the Evacuation of England and started the Dark Ages by Pete Elmore & Barbara Elmore

about this book: The Flaming Dragon is a new story about King Arthur. It is the year 535 AD and a comet has exploded over southern Britain. It happened at the end of the Battle of Camlann. About 90% of the population was killed during this horrific event. This story is based on real climatic data about the decade of 535 AD to 545 AD which was the coldest period in the last 6000 years. King Arthur evacuated the wasteland that was Britain and made his way to Avalon, a land of mists across the sea. He made an alliance with Native Americans and helped in their war with a race of red-haired Giants. It is a story of redemption, as former enemies have to work together to survive. The book deals with several controversial topics such as the comet Explosion, Merlin's origins, King Arthur being from Wales, Giants and Spirit Animals. This book is a mixture of Historical Fiction, Action and Adventure, and Fantasy.