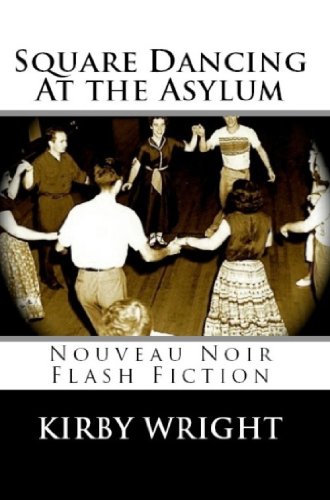 Book: Square Dancing At the Asylum by Kirby Wright

about this book: Here is a collection of dark flash fictions with comic edges. This book is inhabited by Kafkaesque miniatures that journey you through a surreal landscape of hope, humor, and despair.

These fictions began with a dedication. I wanted to dedicated something to a writer in our family who was incarcerated at the Worcester State Hospital as a young man and spent most of his life there. Paul Ford Nolan died the day my mother was married at the same Boston Church that JFK married Jackie O. Paul was forgotten that day. He died in that asylum a decade before I was born but I always felt a gnawing duty to write about him, even though my career path was veering toward sales.

I had trouble writing about Paul from the third person. I decided to crawl into his head and write about his world through his eyes, from the time he hopped a Boston train and rode the rails west to California, not long after his father disowned him. I became him and experienced the shock treatments and the flashes of good memories he had as a boy in Boston with his father.

The incarceration theme ramps up as we meet Dadio and June Spoon, the parents who have in a way incarcerated their own children in their suburban home through guilt, money, physical beatings, and demands bordering on the insane. Yet there remains hope. The narrator hopes that, by shining a light on his shared past with his kid sister, she will someday understand the agony they both endured and will move on to some semblance of a 'normal' life.