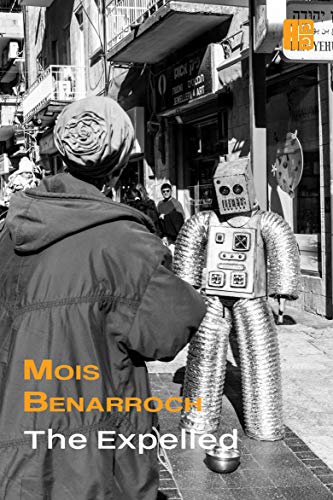 Book: The Expelled by Mois Benarroch

about this book: This novella rose up from a real encounter with someone in the central bus station, that looked exactly like a friend of mine but 20 years younger. The resemblance was so scary I had to sit down and make something out of it. The main character changed a lot, the encounter was with a man and the main character becomes a woman in The Expelled and of course the whole situation is fictionalized, but that's the way literature works.

During the writing of the book I became more and more aware that as I was writing about The Expelled I was also writing about me and my ancestors that were chased from Sepharad/Spain in the fifteen century to Morocco and were for hundreds of years called expelled (in Hebrew: Megorashim). In many ways the word Expelled was a sign of aristocracy, but then who would consider being expelled as a synonym to excellence? Only the Jews can live in such oxymoron.

The novella is part of the cicle "Amor y Exilios" (Love and exiles), which includes 7 books and was published on 2010 by Escalera in Spain. I am excited to see this book in English.

I love the cover of this book! It's a picture I took one morning after a heavy night snow in Jerusalem, I took hundreds of pictures that and this one was the last one I took. This person (is it a man or a woman?) just appeared in front of me out of nowhere by chance, it really represents for me The Expelled.