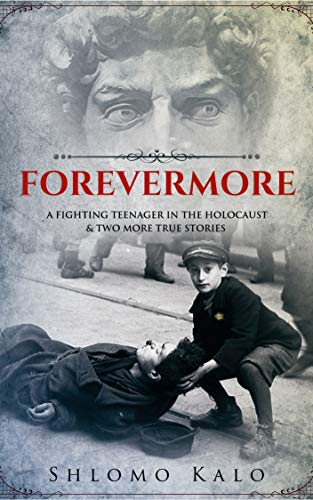 Book: FOREVERMORE - Three Documented stories of the Holocaust and other periods by Shlomo Kalo

about this book: Holocaust survivor and fighter, Shlomo Kalo, also an internationally renown writer and Nobel Prize nominee, delivers a stark and historically significant look into the struggles of the Jewish people and into the riddle of its existence. Three fascinating documented stories that took place during pivotal historical events, including the Holocaust, narrated in a compelling way that makes the book difficult to put down.

A masterpiece in three parts:

Nobleman Zabir Ben Bata witnesses the rise of Muhammad, a preacher who proclaims the new religion of Islam. Growing in power, this belligerent, new spiritual leader has delivered upon Zabir and his fellow Jews of Arabia an unequivocal demand that they find impossible to yield to.

Rabbi Aharon and the Jewish residents of the fortress city of Tulczyn, are betrayed by their Polish neighbors and left at the mercy of the Cossack invaders. Rabbi Aharon knows that the way they choose to react now will be fateful also to the existence of all Jewish communities all over the country.

Teenager Jacob Lipschitz is a single story in the sea of slaughter and suffering that drowned the Warsaw Ghetto in early 1940's Poland. His tale of struggle, survival and unique resilience paints a vivid and haunting portrait of the plight of the Jews and the horrors they faced throughout the Holocaust in Europe.

These masterfully written accounts that interlace little known yet significant anecdotes allow the reader to draw his own conclusions on historical and current events and on "The Jew as he is and not the as he is perceived".

• "An original style of writing and a look at events from an interesting perspective."
— Shimon Peres