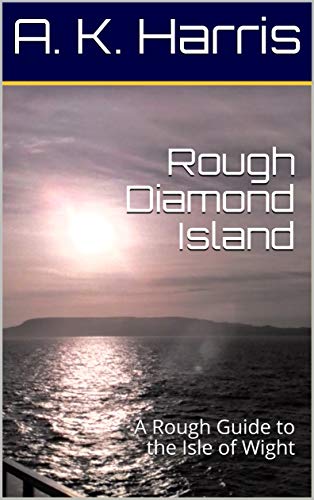 Book: Rough Diamond Island - A Rough Guide to the Isle of Wight by A.K. Harris

about this book: A rather Unique persepective of the UK's Isle of Wight, inspired by the love of the island by a former islander who knew the island landscape better than some residents due to annual walks round the 70 mile coastal path for charity fundraising.

Writing this book has helped to keep me close to the Isle of Wight while I am so far away, it keeps a living breathing line between my heart and the island.

The book hopes to encourage people to visit or move to the island and enjoy it to the full with a bit of background knowledge. It's a beautiful place even with the reality of the problems it faces. The book is for anyone with an interest in the island, islander, mainlander, holidaymaker, prospective resident or anyone interested in travel,learning about places, and the inside stories of those places. Most of the book is firsthand knowledge, with some research on facts and figures to ensure accuracy and truth.

The book is unique in not being written by an outsider as so many guidebooks are, but written by someone who saw and experienced the whole island through building a life there and being involved in volunteering as well as a variety of work that let me see the whole island. There are no glossy pictures, so the words have to inspire imagination.

I tell stories of different parts of the island that guidebooks wont tell you about, from the roads on the prison etstate to where the island floods, to the hidden beach and the visitor attractions where I have worked. Seeing Cowes week from the seafront on my lunchbreaks and also from out at sea on the ship. And the bad side of Cowes Week and the Isle of Wight festival, the impact on locals. You won't read any of this in guidebooks.

I am a fast writer, and this book only took a matter of weeks to produce. The hardest thing about writing the book was that it made my longing to be on the Isle of Wight overwhelming, I learned again what a special experience it had been to live there and be part of everything in that unique community.

The cover photos are my own, taken in October 2018 from out on Sandown Bay. The cover depicts Dunnose Point and Shanklin Chine and the Down from Sandown Bay, with the diamond of late afternoon Sun lighting the sky as it drops behind the down. This view across the bay was one of my all-time favourite views on the island, and many an evening I would sit or stand at Yaverland or any point on the bay and just enjoy this same beautiful view. It is in my heart forever.

The book's title is derived from the island's affectionate pet name 'Diamond Isle/Island' because of the shape of the island. And the Isle of Wight is a rough diamond, wonderful but not without problems. The island that once thrived on the tourist industry has had to adapt to a world of international holidays that has taken that trade.

The Isle of Wight community has great spirit and character, for example a few years ago, a politician described it as something like 'A poor white ghetto' based on his limited knowledge of the island's struggling medical and educational systems, and I recall the wonderful answers that he got from islanders, including a young woman who had just gained a place at Oxbridge, while at the same time, the island won a tourism award for the most family friendly getaway. And those paradoxes and wonders are the spirit of the Isle of Wight. I think the politician was made to eat his words or resign, I can't remember for sure. Go on fighting, Isle of Wight, there is so much hope, you are so special, and you are with me forever through this book.