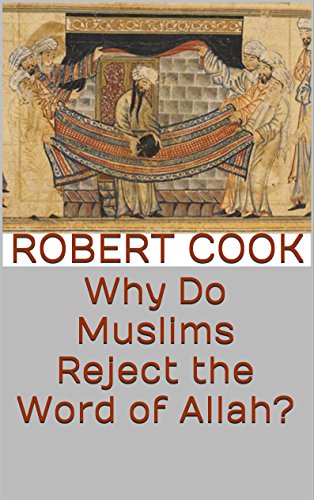 Book: Why Do Muslims Reject the Word of Allah? by Robert P. Cook

about this book: Hello

My name is Robert P. Cook. I am a Christian and for two years now I have been studying and researching the Quran, Islam and writing a book about what I have learned. There is much to be learned about Islam especially in this day and time. Here is an example that one will never hear an Islamic scholar or Imam speak about.

However the Quran DOES NOT AGREE with that belief.

Chapter/Surah 2:136- Say ye: "We believe in Allah, and the revelation given to us, and to Abraham, Isma'il, Isaac, Jacob, and the Tribes, ( the word tribes is speaking about the twelve tribes of Israel) and that given to Moses and JESUS, and that given to (all) prophets from their Lord: We make no difference between one and another of them: And we bow to Allah (in Islam)." - Translated by (Y. Ali)

Chapter/Surah 3:84 - Say: "We believe in Allah, and in what has been revealed to us and what was revealed to Abraham, Isma'il, Isaac, Jacob, and the Tribes, and in (the Books) given to Moses, JESUS, and the prophets, from their Lord: We make no distinction between one and another among them, and to Allah do we bow our will (in Islam)." - Translated by (Y. Ali)

By these two verses alone from the Quran we are told that ALL Muslims are commanded by Allah to believe in ALL of the books of revelations sent down to mankind from Allah. And yes the Quran says that even the Old and New Testaments were given to mankind by Allah.

We can also see that these two verses tell use that the Quran, the Old and the New Testaments are ALL of equal value in the eyes of Allah. Which means that when Muslims refuse or simply do not read and study the Old and New Testaments. They are REJECTING the Word of Allah.

Which is why the title of my book is " Why Do Muslims Reject the Word of Allah?"

Did you know that Muslims believe that a Jewish Jesus will return to earth, kill unbelievers and help to create a world dominated by Islam?

Did you know that Muslims believe that the second best way to get into Paradise and to get the best place in said Paradise is to die by Jihad?

Did you know that according to the Quran when Muslims get into Paradise they will be served by wide eyed virgins and perpetually fresh, and beautiful boys who are precious as pearls?

Did you know that Muhammed was influenced by Catholicism, Gnosticism and Paganism?

These are just a few little known tidbits of insight that one will never hear a Muslim Scholar or Imam speak of in public!

If you want to learn more about Islam from an unbiased point of view you need to buy my ebook and learn.