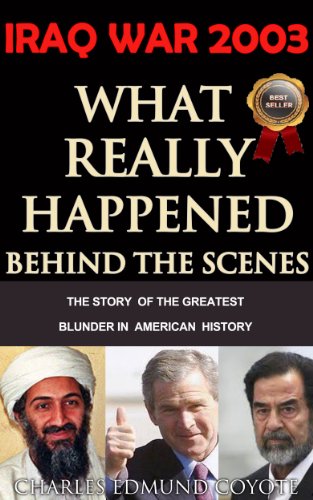 about this book: "[it is] a contribution to history... I cannot recommend this book highly enough... as a journalist... turns out I was not nearly as informed as I believed... beyond belief... [helps you] understand the Iraq war in a wider context... Coyote clearly is a master political scientist... eminently readable... this is a complex work that still moves easily from page to page... obsessively researched".

It is true that I spent several years "obsessively" researching, because I wanted to be sure of the validity of the realities exposed before I started writing. Truth can be a difficult pill to swallow. Being a conservative at heart, it was very disturbing to realize how much the conservative party has strayed from the main-street principles with which it once resonated, and how the US governing class has profoundly changed. The book discusses how these changes threaten the values of democracy and the rule of law, the foundations of which were gained by the English speaking peoples only by great struggle across many centuries.

The book outlines a great deal of information the American people ought to be aware of, if we are to have much chance of preventing similar disasters in the future. As Winston Churchill said "Those who fail to learn from history are doomed to repeat it."

Even though a lot has been written on the Iraq War of 2003, this book enables one to understand the war in its widest context. The book begins with the attacks of 9/11 and finds that the American people still had much of the same character their elders did in the time of Pearl Harbor, December 1941. It continues with the ample warnings that preceded 9/11, the escapes of Mullah Omar and Osama bin Laden during the weeks that followed, and the unreported attempts of Saddam Hussein (who once had been in the pay of the CIA and considered himself an ally of the US government for decades) to avoid war by offering to prove Iraq had no WMDs, and give American oil companies all the concessions they could want. The book goes on to answer questions like:

• What was the strategy of al-Qaeda and how did it lead to 9/11? What was the Bush administration's response to this strategy?

• What military strategy did the U.S. pursue in Afghanistan that routed the Taliban and nearly annihilated Al-Qaeda within a few months after 9/11? What prevented our troops from administering a coup de grace?

• In his war with Iran, Saddam Hussein used weapons of mass destruction, including several poison gases. Where did Saddam get these WMDs? How were Donald Rumsfeld and GHW Bush involved?

• The war with Iran left Iraq with massive debts. What was Saddam's solution to these debts? What did the U.S. ambassador to Iraq say to suggest our acquiescence?

• What are the fundamental beliefs of conservatism? How have the actions of neo-Conservatives revealed different beliefs, particularly in the areas of government debt, habeas corpus, and the moral basis of sound government? What is a noble lie?

• What is the Tolstoy Syndrome and do you think it affects George Bush?

• What is the connection between al-Qaeda and Saddam Hussein?

• In the summer of 2001, what members of the government believed there was a very strong possibility that al-Qaeda was about to attack? How were their arguments received? The phrase "the system was blinking red" was used at this time. What does it mean?

• How did the Bush administration manipulate public perception and discourse after 9/11 so that it could argue it was trying to avoid war in Iraq?

• Were the French right during the lead-up to the invasion of Iraq? Here, address the evidence for WMDs and the idea that war is a solution.

• What effect did torture have on the war in Iraq? Did it aid recruitment by al-Qaeda? What percentage of American casualties in Iraq can be attributed to non-Iraqi fighters?

• What is asymmetrical warfare? Why is the U.S. vulnerable to this strategy?

It is an interesting read. Go ahead, and let me know what you think!
---