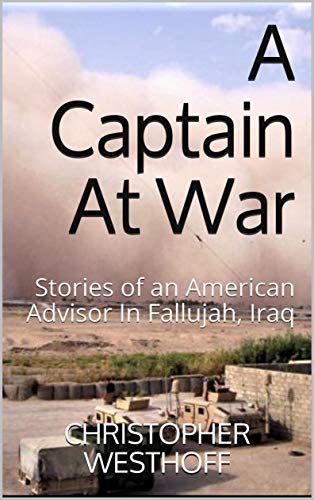 Book: A Captain At War - Stories of an American Advisor In Fallujah, Iraq by Christopher Michael Westhoff

about this book: War is complicated. It can confuse and rattle even the most highly trained. Join the author in the aftermath of an IED explosion. Experience, vicariously, what it is like to be given the mission of bringing peace to the war torn city of Fallujah, Iraq. A Marine Captain is fighting an insurgency, not with his fellow Marines but with the nascent Iraqi Army. Join this rediscovery of memories of the best and worst 7 months of his life.

Many Americans thank veterans for their service. Only a small fraction of Americans serve in the armed forces and even less see combat. That is the way it should be in a free society. Many people are happier not knowing exactly what they thank our combat veterans for. That is also as it should be. However, if you are interested in taste of that service this is the book for you. Be advised there is a reason most people don't want to know...