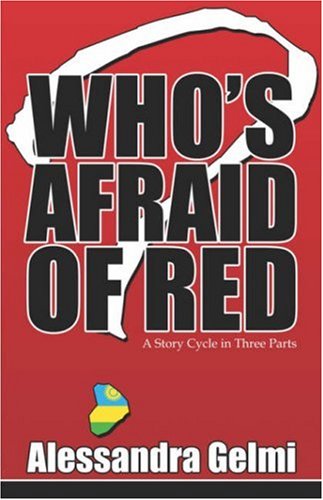 Book: Who's Afraid of Red - A Story Cycle in Three Parts by Alessandra Gelmi

about this book: This is a story-cycle in three parts. It was originally conceived as a "process" piece, an active, dynamic "animal' depicting the push-pull romantic relationship between characters Sylvia and Leon. The action was in the dialogue between them. Then, as is usual in life and art, other people showed up and complicated things.

Leon, a man with a dark secret, a cosmic orphan grappling for God, began as the protagonist of this novella, but when two women appeared as his celestial navigators, he had to share the role. These two women steered him home. That place where he came from. A sacred state of mind. I think ultimately my book is an investigation into what it means to find "home", that place of peace and joy,in this third dimensional world. It is certainly a longing of mine which I wanted desperately to share with my characters.

In sum: Sylvia, an art professor, meets Leon a former divinity student turned war correspondent for The Washington Post, at a Christmas party in Washington, D.C.December 6,1996. (In 1994, while in Rwanda, with a progressive missionary team, Leon began writing monographs (on the Rwandan Genocide) which were picked up by the Washington Post, eventually leading him to a job offer and a Pulitzer.

Sylvia's Judeo-Christian faith is in tact while Leon's has been speared from his brutal observations in Africa. As a result, Leon has numbed himself from the world. We discover this at a pivotal point in the book where we find Sylvia and Leon in bed. The title of this section is "In Bed with the Truth" and this is really where the novel takes off.