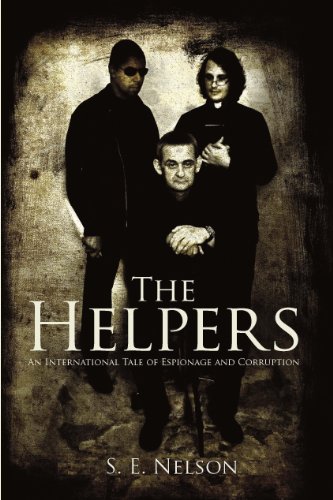 Book: The Helpers - Volume I by Suzanna E. Nelson

about this book: American Journalist Jenny Osborne finds herself on the run, caught in a web of intrigue and assassinations, when she obtains damaging information that could bring down "The Helpers" - a very powerful underground organization whose members include international businessmen and high priests. Their main aim is to maintain a stronghold on the natural resources of the Democratic Republic of Congo (DRC) and they will stop at nothing to prevent Jenny from exposing them. Her only hope is Lance Lemmand, a veteran French Intelligence Officer in Congo, and his handsome sidekick Pierre-Jean Philippe. But will they find her before it is too late? Or will "The Helpers" silence them once and for all.

• Who are the primary readers of your book?
Readers who like International espionage will enjoy this book.

• How long did it take to write it?
Four years

• How did you come up with the title?
The deadly underground group written in this story started out during colonialism and at the time they thought of themselves as a group was helping Congo, but what they ended up doing is helping themselves to its natural resources

• Why did you choose this cover?
It represented all the elements of "The Helpers."

• What was the hardest part of writing your book?
I was writing and working full time. A lot of research went into this book.

• What was involved in the research?
Besides what I already knew from school, I read a lot of books about the history of the two Congos (Democratic Republic of Congo and Republic of Congo), especially during colonialism. My aim was to look at that and use it as a backdrop to the story. It was a very good learning experience.

• What do you want to say to your readers?
Although the story is inspired by actual historical events, "The Helpers" is a fictitious story. It is an international thriller which sheds light on the political workings of developing countries in a warzone. The reader will most likely learn something new about the two Congo (DRC & ROC) and their history, but most importantly I hope that the story keeps the reader engaged and waiting to see what happens next. I would not recommend this story for children under the age of sixteen as there are rape scenes and bad language.