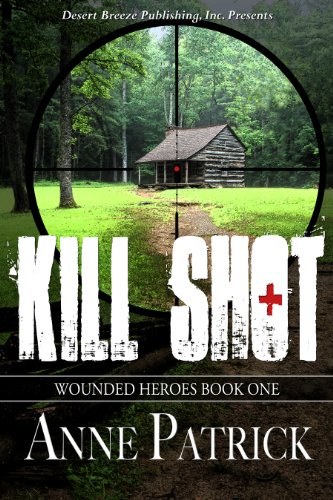 about this book: Former combat medic Kory Wagner survived four war zones, but not without psychological scars. Suffering with PTSD has become the least of her problems though. Someone has murdered her cousin and now has their sites on Kory. Just as disturbing is the cocky, headstrong, and handsome sheriff on the case.

Sean Harding takes his job very seriously and isn't about to let the decorated veteran who managed to outsmart an entire search party hinder his investigation into her cousin's death. Kory is as headstrong as he is though, and he soon realizes having her tag along on the investigation isn't such a bad idea. Despite all his efforts to stay focused on the case, this beautiful and vibrant spitfire manages to capture his heart. But if he has any hopes of a future with Kory, he must convince her she needs help dealing with her problems, and he has to stop the killer before she becomes his next victim.

• "Kill Shot is an excellent start to the Wounded Heroes Series and I for one can't wait for the next installment! Anne once again works her magic in blending just the right amount of humor, suspense and romance to keep you glued to the end."

• "I am a new fan of Anne Patrick! She writes about great characters, who have flaws like the rest of us. Can't wait for the next in the series."

• "Right to the very end Ms. Patrick keeps you guessing and wondering what is going to happen next. Excellent suspense book that will keep you turning the pages to find out just who was after her and why."