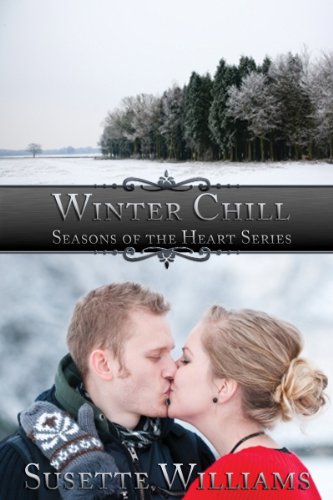 Book: Winter Chill (Seasons of the Heart) by Susette Williams

about this book: SEASONS OF THE HEART is a novella series about four friends who attend college and find love in the most unexpected places.

Read about each story:

Falling in Love - Available on Amazon

Katie Morgan has her future planned. It doesn't include becoming serious about anyone before she achieves her goals, not even her handsome boss. Just because she does not have time to date, doesn't mean her boss shouldn't. Her new mission…to make her boss happy, whether or not he wants to be.

Wade McAlester fell in love with Katie the first day she walked into his clinic looking for a job. He hired her, content to settle for friendship until she lives out her dream of becoming a vet. Against his better judgment, Wade allows her to fix him up with a couple of her friends. The dates are disastrous. He can't believe the kind of women Katie seems to think he'd enjoy spending his life with. However, when Wade's old colleague, Dr. Laura Redmond shows up, Katie is rethinking how happy she wants her boss to be, and with whom. Definitely not the gorgeous doctor.

• Winter Chill
When Sasha Steinfeld sees Katie Morgan's engagement ring, she realizes it could have been her. If only she wasn't so frigid around men. Overcoming the past isn't easy, but Sasha knows she must if she ever wants to find the same happiness Katie has found.

The last person Forrest Tucker expects to see when he gets to his cabin is Sasha. He thinks Sasha is a bit different, although he's never concerned himself with why. Now she is trying to break into his cabin. When he realizes she's injured, Forrest does what any good citizen would do—if they were helping someone else.

When Forrest learns the secret behind Sasha's chilly personality, he sets out to help her thaw.

• Spring Break - Available Spring 2013!
Kelly Sanders wakes up in a daze in the hospital. Every muscle aches. Her friend Margaret isn't wasting any time consulting with the doctor or Kelly's proposed therapist. Margaret is more than willing to make sure Kelly makes it to her sessions with therapist Marc Stevenson. Marc is charming and helpful, with eyes for Kelly.

Marc thinks Kelly would be perfect for him, except for that one flaw. How does a man, with visions of children, fill a nest that's sure to be empty if he spends it with the woman he loves? There's always adoption, and an orphanage in their hometown gets him to realize how much love he has to give.

• Heated Summer - Available Summer 2013!
Margaret Stephens has her sights set on marrying a man with a promising future. Nicholas Alexander is definitely not that man. His boyish charm isn't going to sidetrack her; not that he appears to want to. Nick's judgmental manner irks her because he doesn't know her…not well enough to condemn her.

Nicholas has seen enough gold diggers like Maggie. The purrfect little kitty who warms up to rich guys. Then when the unsuspecting bums marry them…they find kitty has claws. He's already been scratched and isn't about to make the same mistake twice.

Margaret doesn't plan on ever going hungry again. A visit to the orphanage brings up the past she keeps trying to forget. To Nicholas, it's a reminder of all the things he has to be thankful for and he hopes that Margaret will come to appreciate all that she has.. Can two people from different sides of the tracks meet somewhere in the middle? It's a rough ride till they find out.

• Review
"A great story, that will pull at your heart strings as Sasha works through her pain and hurt, and you will want to cheer her on, and she addresses the feelings for Forrest. A wonderfully told story in a short novella, a great way to spend your afternoon! 4.5 stars." Cindy Loven